Jon the Postman, The Negatives
Fanzine
1977 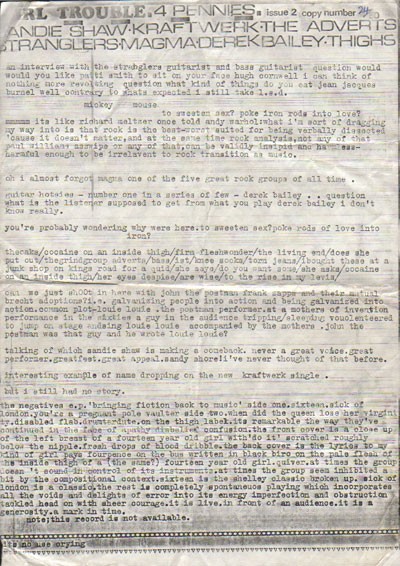 It includes a short interview with the Stranglers, mentions of Magma, Derek Bailey, Sandie Shaw and Kraftwerk, as well as a poem about the Adverts, and a discussion of the connections between Jon the Postman and Frank Zappa. There is also a long review of the 'Bringing Fiction Back to Music' EP by the Negatives (a band that featured Morley, Boon, and photographer Kevin Cummins): the record was never actually recorded, let alone released, hence the final line of the review: 'this record is not available'!

Full text reads as follows (including spelling and formatting mistakes):

GIRL TROUBLE. 4 PENNIES, issue 2 copy number 24/50
SANDIE SHAW •KRAFTWERK •THE ADVERTS STRANGLERS •MAGMA •DEREK BAILEY •THIGHS
an interview with the stranglers guitarist and bass guitarist question would
would you like patti smith to sit on your face hugh cornwell i can think of
nothing more revolting question what kind of things do you eat jean jacques
burnel well_contrary to whats expected i still take l.s.d.
mickey mouse
to sweeten sex? poke iron rods into love?
mmmmm its like richard meltzer once told andy warhol:what i'm sort of dragging
my way into is that rock is the best-worst suited for being verbally dissected
‘cause it doesn't matter, and at the same time rock analysis, not any of that
paul williams asswipe or any of that, can be validly insipid and harmless-
harmful enough to be irrelavent to rock transition as music.

oh i almost forgot magma one of the five great rock groups of all time .

guitar hotsies - number one in a series of few - derek bailey . . question
what is the listener supposed to get from what you plav derek bailev i don't
know really.

you're probably wondering why were here. to sweeten sex? poke rods of love into
iron?

can we just shOOt in here with john the postman frank zappa and their mutual
brecht adoptions?i.e. galvanizing people into action and being galvanized into
action.common plot-louie louie .the postman performer.at a mothers of invention
performance in the sixties a guy in the audience tripping/sleeping vouolenteered
to jump on stage andsing louie louie accompanied by the mothers .john the
postman was that guy and he wrote louie louie?

talking of which sandie shaw is making a comeback. never a great voice.great
performer.greatfeet.great appeal.sandy shore!i've never thought of that before.

interesting example of name dropping on the new kraftwerk single .

but i still had no story.

the negatives e.p.'bringing fiction back to music’ side one.sixteen.sick of
london.you're a pregnant pole vaulter side two.when did the queen lose her virgini
ty.disabled flab .drumtardute,on the thigh label. its remarkable the way they’ve
continued in the face of apathy disbelief confusion.the front cover is a close up
of the left breast of a fourteen year old girl with’do it’ scratched roughly
below the nipple.fresh drops of blood dribble.the back cover is the lyrics to my
kind of girl pays fourpence on the bus written in black biro on the pale flesh of
the inside thigh of a (the same?) fourteen year old girl.quiver.at times the group
doesn’t sound in control of its instruments.at times thegroup seem inhibited a
bit by the compositional context.sixteen is the Shelley classic broken up. sick of
london is a classic.the rest is completely spontaneous playing which incorporates
all the voids and delights of error into its energy imperfection and obstruction
tackled head on with sheer courage.it is live.in front of an audience,it is a
generosity.a mark in time.
note;this record is not available.
xxxxxxxxxxxxxxxxxxxxxxxxxxxxxxxxxxxxxxxxxxx
its no use crying
vvvvvvvvvvvvvvvvvvvvvvvvvvvvvvvvvvvvvvvvvvv
Artefact added : 5th June 2007
by Robin