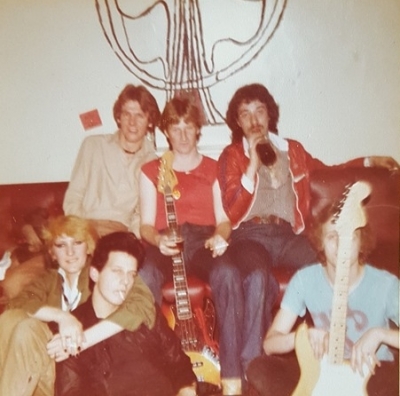 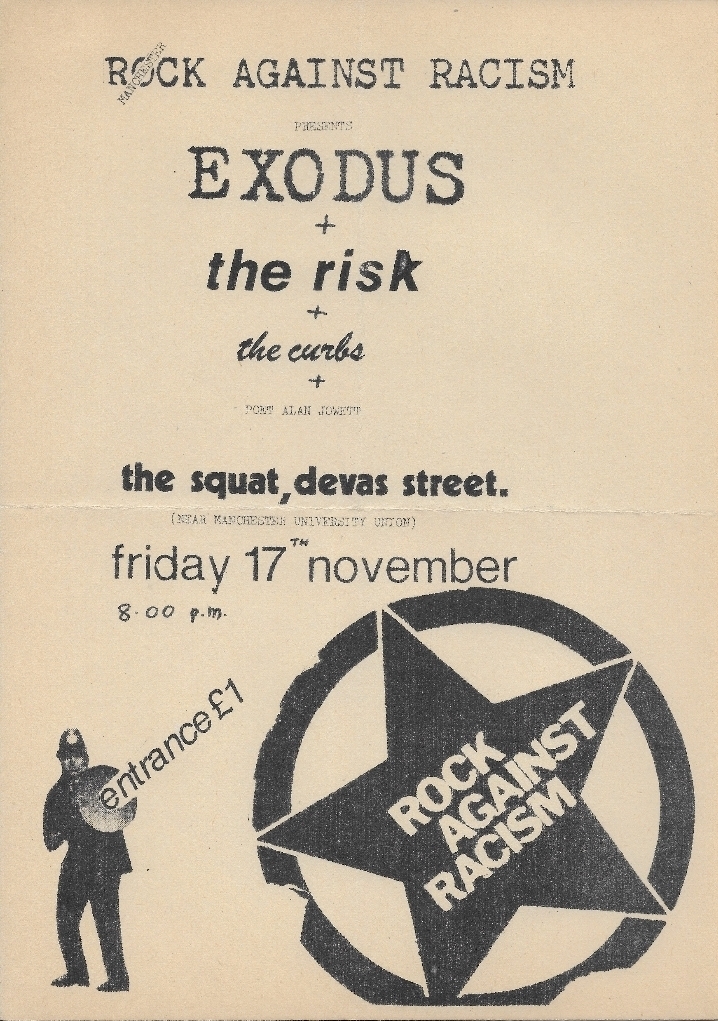 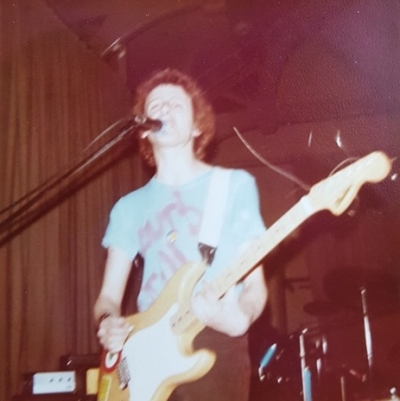 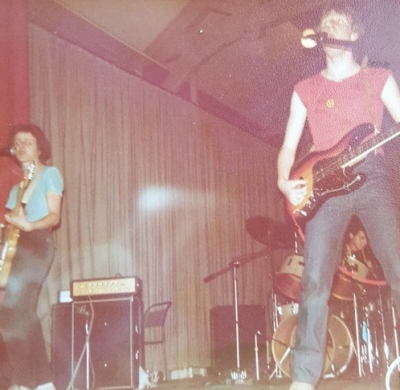 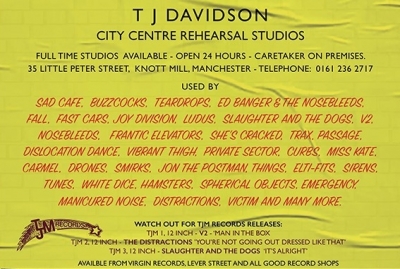 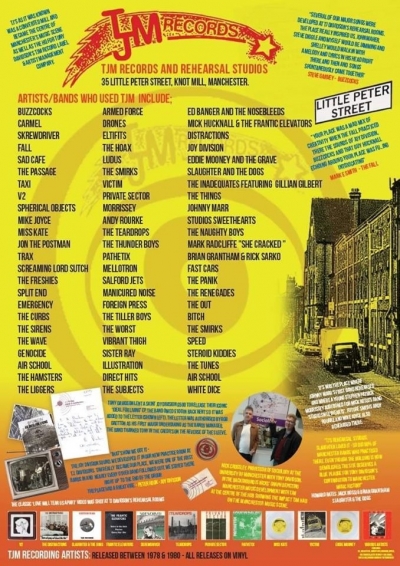 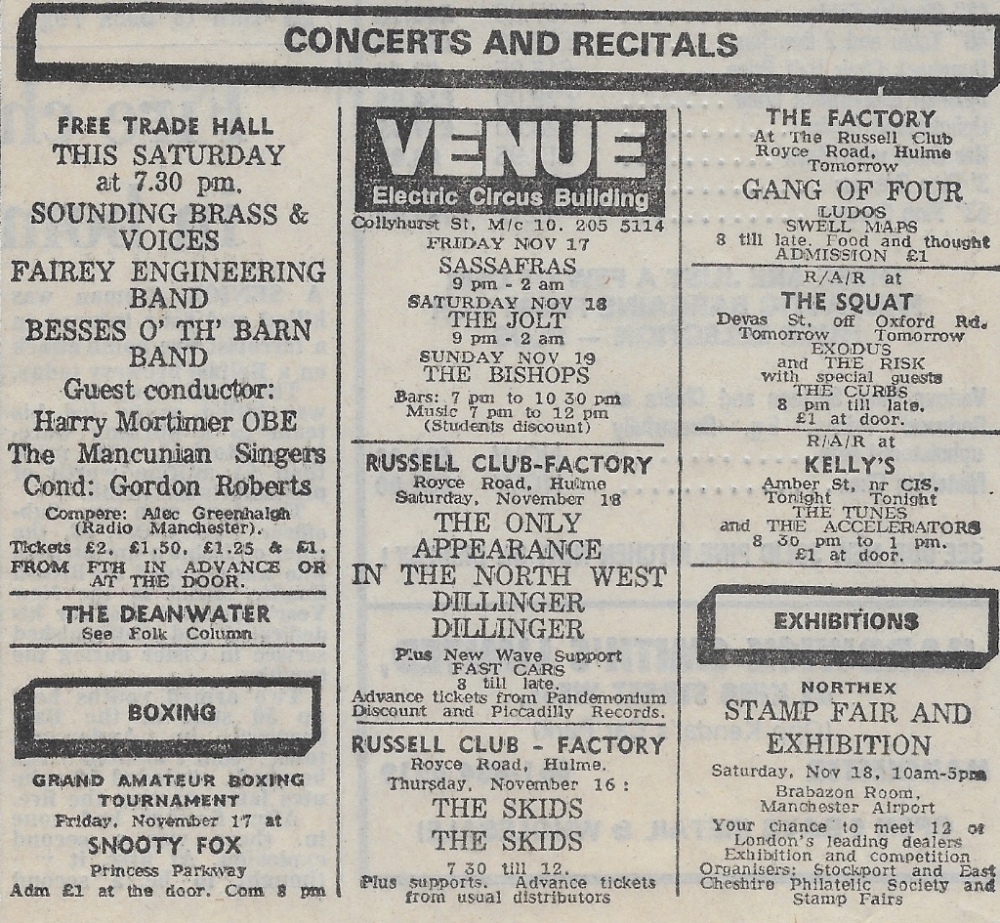 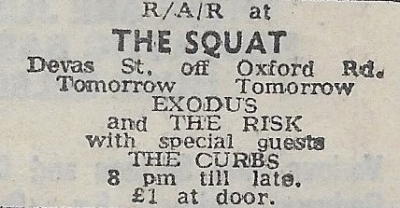 About the evening from curbsfan..
I drove The Curbs and their equipment down Oxford Road to The Squat.
It was a large cavernous venue with a generous back stage area, hit hard
with paint spray of the bands name, recall we sat on a sofa for a band photo.
The Curbs sat up on a wall, photos were taken but Pete Taylor has those.
I took a couple of the band on stage, belting out songs off The Clash's first album, stuff like Janie Jones, What's My Name, I'm So Bored With The USA.
The Clash were a major influence on The Curbs, who enjoyed coverin' em'.
Artefact added : 22nd September 2019
by curbsfan

Abigail Says –
These are amazing!

Makab Says –
Curbsfan I am Mike Cross. Finding this fantastic material has absolutley made my day. Thank you so much, you have made an old punk rocker very happy.

curbsfan Says –
Hi Mike! Phil here. I am Curbsfan. Hope you, and Stuart are safe and well. Glad you like the Curbs photos, and other stuff I have put on MDMA. I have added more stuff under Curbs. And under Kelly's. I am based in Berlin, been here 37 years. I visit Manchester several times a year. We had some great nights back in 1978/79. All the best, Phil.

Curbsbass Says –
Thanks for taking these pics in the first place and for sharing them now. Happy days.

I honestly kept none of it at the time

curbsfan Says –
Hi Pete! Phil here. Glad you like the pics. I managed to keep all I took. Put them, and other Curbs stuff I had collected, on MDMA for posterity. I always hoped you, Mike and Stuart would find them one day, and like what you see. A Curbs reunion in Manchester would be nice, for old and happy times sake. I put the International Set badge you gave me in 1980, on MDMA too. Recall we went to see the Fast Cars at the Portland Bars with some of the band members, 24th Nov 1980. Last ever gig of the original Fast Cars. I am still based in Berlin. Before the pandemic, I was over fairly often for music and football, and will be again when things normalise. Keep safe and well. All the best, Phil

My email : Phil.Painter@t-online.de
If you'd like to leave a comment, please Login. Login
Manchester Digital Music Archive is licensed under an
Attribution-NonCommercial-ShareAlike 4.0 International License.
Charity no. 1164179
Our archive currently contains 3870 Bands, 758 DJs, 1461 Venues, 323 Industry Professionals and 29719 artefacts contributed by 4047 members.