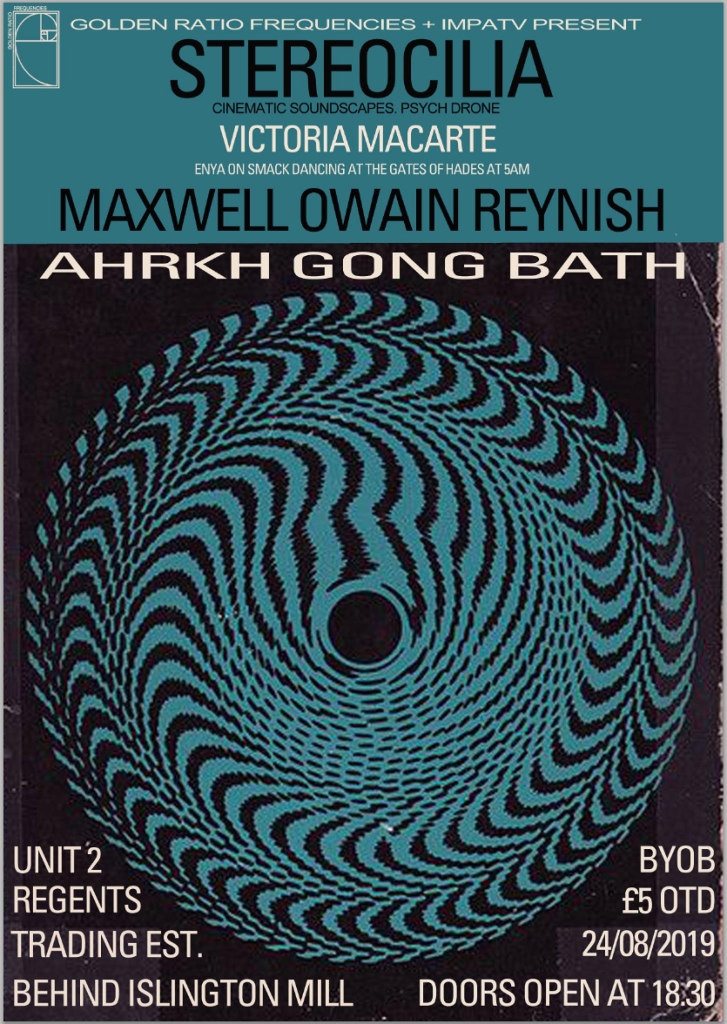 AHRKH is the solo project of A P Macarte, current multi-instrumentalist member of Salford's critically acclaimed noise experimentalists GNOD (Rocket Recordings/NoNotFun) and founder of the GOLDEN RATIO FREQUENCIES micro-label, radio show and Holistic Sound Facilitator. .
Using Modular synthesiser, field recordings and voice, and often paired with video, light manipulation and visual collaborations, AHRKH explores the relationship between sound and vision, and their ability to invoke altered states, to touch the intangible within us and transcend our present reality, or in his own words “Traverse the infinite aural/astral panorama and ultra-dimensional transportation methods via sound”.

For this performance AHRKH will be bathing us in vibratory energies with a SOUND BATH incorporating GONGS, Modular Sythesiser, bowls and voice for deep relaxation, restoration and mental, physical and emotional cleanse...

"Transcend your immediate headspace, and float into a realm of Oceanic Boundlessness expanding your awareness to a deeper, higher and wider state of being with us.’’ -AHRKH

Maxwell Reynish is Inspired by natures language & his placement in the world. Intuitively combining surround rhythmic variations, with micro sounds and natural textures, Gathered whilst in his current landscape and returned after each showing to start a new.

Originally from Cumbria and from a dance background, after training in theatre, ballet and contemporary dance in some of London’s most prestigious schools, Victoria went on to study Butoh with a Japanese master and has been based in Catalonia since 2004.

Emerging from Barcelona’s underground electronic music and digital arts scene, after a short but intense period in New York, for the last four years she has made Cadaqués her home alongside surrealism and the elements. From this base, her work has immersed itself in the natural environment, deepened into improvisation and expanded across collaborations in music, performance, spoken word, video and cinema; defined by an aesthetic as opposed to a medium or discipline. When she grows up she hopes to become a force of nature.

FOLKCORE is a collection of folk songs from the future, accompanied by three analogue synths making noise like a storm on the horizon; pulsing minimal jungle beats like the nation’s charred post-industrialist heart and sang through a vocoder distorting a fairy-like voice with demonic undertones. Basically like Enya on smack trance dancing at the gates of Hades at 5am. Soft Brexit sounds for the dawn of the apocalypso.

Over the past 10 years John has performed around the UK & Europe with various projects. He has also presented work for live radio broadcasts, and soundtracks to short films.

Stereocilia's 4th album, and second for Drone Rock Records, ‘The Silence That Follows’ is out now. Following on from 2017’s sellout album, ’Hive Mind’, Stereocilia is once again pushing the boundaries of cinematic soundscapes and psych drone. ’The Silence That Follows’ is built upon a bedrock of processed sounds, heavy synths and layered guitars, which fill the stereo spectrum, and as such is an album you can immerse yourself in and be taken away on a journey.