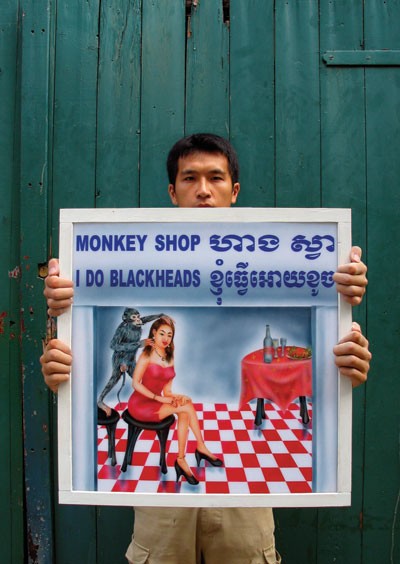 A great card designed by poet, songwriter and Chorltonite Ed Barton. The card was designed for the MDMArchive to promote the launch at Urbis, Tuesday 21st September 2004. The picture may look like it's taken in Asia, but is infact taken in Chorlton. The sign, however was made for Ed on a trip to Vietnam.

Ed was one of the first Mancs to appear on Tyne Tee's 1980s music programme 'The Tube'. He was sat in a twelev foot high chair playing his non-hit 'I've Got No Chickens But I've Got Five wooden Chairs'. The chair is still in his back garden and may have been used by James in the 'Sit Down' video.

Ed Barton has written songs for such celebs as Kylie ('Confide In Me') which was saampled by Opus 3 for their 'It's A Fine Day' single.
Artefact added : 5th June 2007
by mat