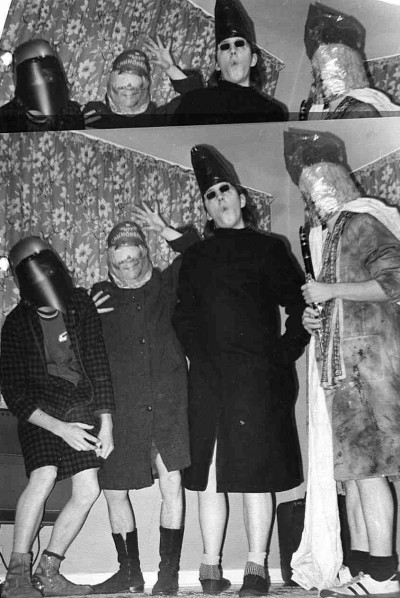 A personal favourite. During the weekly recordings of Iron Lung 'Wacky Tapes' sessions we invariably had a brew or two and took pictures of an eccentric nature, these days they'd be called 'publicity stills' but you wouldn't believe the effort that went in to them!
Left to right - Sinuf Mood, now of The CasualTies and Beat Science, Landmark, now of Beat Science, Sbilts, now of Beat Science (and formerly of Biting Tongues, Men of 992 and Johnny's Airforce) and finally, Howard Walmsley, still in Biting Tongues.
Sometimes you just can't give it up!
Artefact added : 5th June 2007
by sinuf_mood

sbilts Says –
I can't do that with my leg anymore sadly
If you'd like to leave a comment, please Login. Login
Manchester Digital Music Archive is licensed under an
Attribution-NonCommercial-ShareAlike 4.0 International License.
Charity no. 1164179
Our archive currently contains 3831 Bands, 752 DJs, 1454 Venues, 303 Industry Professionals and 29438 artefacts contributed by 3984 members.