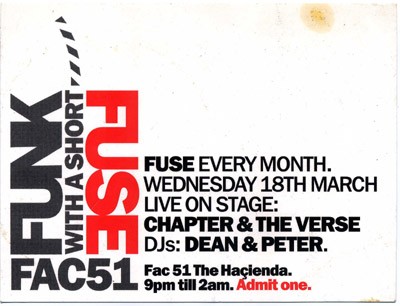 Chapter & The Verse was the brainchild of Anif Cousins and Colin Thorpe. Initially releasing records on Liverpool's Rham! records (home also to A Guy Called Gerald's 'Voodoo Ray'),
they gained praise for their Great Western Street LP from
which the club hit 'Black Whip" was taken.

DJ Dean was a regular DJ at The Hacienda from early on. As well as a bit of journalism he also worked in Richard Searlings 'Expansion' record shop.
Artefact added : 5th June 2007
by 1963