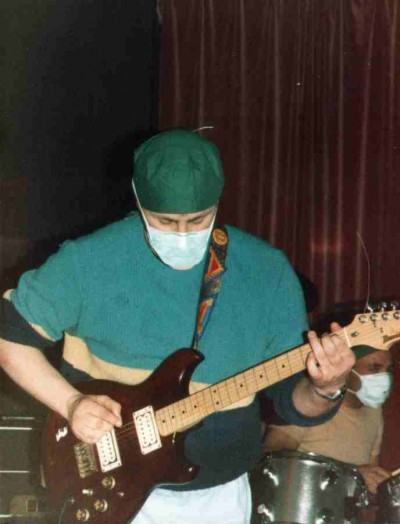 7th April, 1984. Sbilts multi-tasking!
Surgeon's hats and masks were that night's garb of choice. No particular relevance to that other than the fact that we had some!
Artefact added : 5th June 2007
by sinuf_mood

sbilts Says –
Ghanzi courtesy of C&A Stockport. Wasn't this 992's 1st ever gig supporting Special 20? The night of the mislaid harmonica that precipitated the cardinal sin of stopping the tune half way through to look for it?

sinuf_mood Says –
No. Mazz was the drummer at the first gig and despite the surgeon's mask you can see it's PD drumming here.

sbilts Says –
By god sir your right as usual. I forgot it was Mazz that night. I have the tape and just before we started the first number you can hear him say "Get a nappy for Sbilts" followed by a loud and cruel laugh from Lynn Bamford. Anyone would think I get nervous before a gig from hearing that.....

sbilts Says –
I sold the Ibanez guitar in this picture to Snod of DMangos a few years ago. It has had a radical makeover since then by his lad Jake who is honorary guitarist with the Zans and the youngest member by about 35 years.

sbilts Says –
I just realised thats a Biting Tongues badge on the guitar strap.....wonder what became of that?

sbilts Says –
It passed in the blink of an eye but seemed to last a lifetime for those involved....You did the right thing blotting out the memory with booze though......

sinuf_mood Says –
I'm not sure if Ian was playing with them at this time, but I certainly saw and spoke to him many times after this event!

Ian Slater Says –
It would have been me, I was the only bass player for the life of the band! You still playing Arnie?

sinuf_mood Says –
Don't flatter yourself! Paul Bamford (saw him and Julie recently on Portwood!) loved to move around different musicians! Am I right in thinking you joined the Police, the force, not the band!

Ian Slater Says –
Not sure what you mean? Special 20 was the band that DJ (the harp player) and I formed in 1981 or so, I was the only person who played bass, I stayed with them right through till it fell apart in about 1986 or 87.
DJ and I recruited Paul and Lynne when we saw Paul playing with the Handsome Brothers (PD on drums, Mal on bass) upstairs at the MA. Mass the drummer was in the original Special 20, later replaced by Cliff, then Paul Baines. Early Special 20 also had Dougie (the drunken dentist) on guitar, his last gig was at Dingwalls in Sheffield-I've still got the poster!), and he was replaced by Jim (real name Duncan) Moore.
After Sp 20 folded Paul, Lynne and I started the Bamford Blues Band, but then I left to form the Harpbreakers with DJ, Jim, Bob Oates and Nige or NJ Duke as he called himself-that would have been around 1988 ish. **Edit-Bob says it was 1989.
Then I was in a band with Pete Ainsworth the singer (who brought his dog along to gigs), Neil the blind drummer, and a guitarist from Chorlton whose name I can't remember. Oh yes I can-Dave.
I didn't join the police! I was on the dole when the band started, then I started working for DJ (1985-1986) driving his van, then I worked for a fresh produce company in Gorton (86-92) for 6 years or so.

Ian Slater Says –
Here's us on the telly:

sbilts Says –
I thought Ronnie Poole did a stint on bass at some point...maybe that was the Handsome Brothers...Mal was rhythm guitar/vocals...opened with the cheesy line.."I am Handsome and these are brothers" (groan) I still have the USA Fender Bullet I bought off Duncan when he "upgraded"it to a Gibson 335......

sbilts Says –
He was Head boy at our school (Wilbraham High) I do remember that...

sinuf_mood Says –
Ian - I was mixing you up with someone that played for the Megaband! Age and wine are my excuses! Me and our kid once came to the Philharmonic in Liverpool to see you one night in the days when Cliff was drumming. (I recall he played a 'policeman' in a performance of Gilbert and Sullivan in Emmerdale Farm, as it was known in those days!