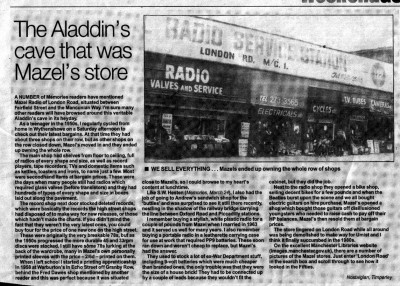 Evening News article about Mazel Radio stores on London Rd near UMIST..following on from an earlier thread by sblits. It reads:

"A NUMBER of Memories readers have mentioned
Mazel Radio of London Road, situated between
Fairfield Street and the Mancunian Way. I'm sure many
other readers will have browsed around this veritable
Aladdin's cave in its heyday,

As a teeenager in the1950s, I regularly cycled from
home in Wythenshawe on a Saturday afternoon to
check out their latest bargains. At that time they had
about three shops on their row, but as other shops on
the row closed down. Mazel's moved in and they ended
up owning the whole row.

The main shop had shelves from floor to ceiling, full
of radios of every shape and size, as well as record
players, tape recorders, TVs and domestic items such
as kettles, toasters and irons, to name just a few Most
were secondhand items at bargain prices. These were
the days when many people still had radios which
required glass valves (before transistors) and they had
hundreds of types of every shape and size in boxes
laid out along the pavement.

The record shop next door stocked deleted records,
which were basically the recoidsthe high street shops
had disposed of to make way for new releases, or those
which hadn't made the charts. If you didn't mind the
fact that they weren't the very latest ones, you could
buy four for the price of one new one on the high street

These were originally the very breakable 78s, but as
the 1950s progressed the more durable 45 and 33rpm
discs were stocked. I still have s6me 78s lurking at the
back of the wardrobe, many in Mazel's own personally
printed sleeves with the price - 2/6d - printed on them.

When I left school I started a printing apprenticeship
ln1958 at Warburton's in Echo Street off Granby Row,
behind the Fred Dawes shop mentioned by another
reader and this was perfect because it was situated
close to Mazel's, so I could browse to my heart's
content at lunchtime.

I also had the job of going to Andrew's sandwich shop for the
'butties' and was surprised to see It still there recently,
nestling in the shadow of the railway bridge carrying
the line between Oxford Road and Piccadilly stations.

I remember buying a stylish, white plastic radio for a
couple of pounds from Mazel's when I married In 1963
and it served us well for many years. I also remember
buying a portable radio in a leatherette carrying case
for use at work that required PP9 batteries. These soon
ran down and weren't cheap to replace, but Mazel's
had the answer.

They used to stock a lot of ex-War Department stuff,
including 9-volt batteries which were much cheaper
than branded ones, the only trouble was that they were
the size of a house brick! They had to be connected up
by a couple of leads because they wouldn't fit the
cabinet, but they did tha job.

Next to the radio shop they opened a bike shop,
selling decent bikes for a few pounds and when the
Beatles burst upon the scene and we all bought
electric guitars on hire purchase, Mazel's opened a
shop which bought those guitars off disillusioned
youngsters who needed to raise cash to pay off their
HP balances. Mazel's then resold them at bargain
prices.

The store lingered on London Road while all around
was being demolished to make way for Umist and I
think it finally succumbed in the 1980s.

On the excellent Manchester Libraries website
(images, manchester.gov.uk), there are a number of
pictures of the Mazel stores. Just enter 'London Road*
in the search box and scroll through to sec how it
looked in the Fifties.

sbilts Says –
Wow that brought back some memories........
If you'd like to leave a comment, please Login. Login
Manchester Digital Music Archive is licensed under an
Attribution-NonCommercial-ShareAlike 4.0 International License.
Charity no. 1164179
Our archive currently contains 3734 Bands, 739 DJs, 1424 Venues, 260 Industry Professionals and 27779 artefacts contributed by 3846 members.