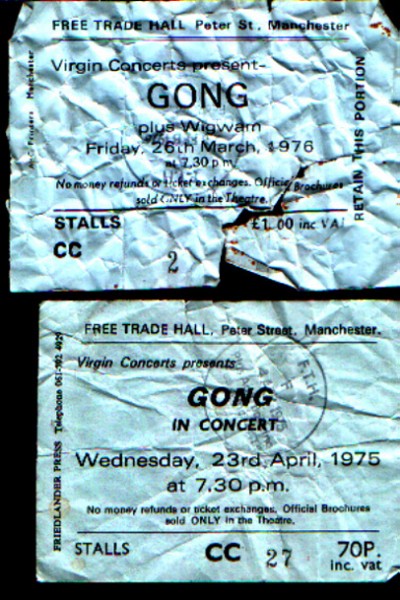 Two Tickets for Gong in consecutive years..
Any one who knows their Gong history will recognise the early gig as being the "Fish Rising" tour where Steve Hillage has taken the helm.The Drummer Brian Davidson was replaced by a roady halfway through due to extreme enebreation.
The second gig (gone up 30p to a quid) was the Shamal tour where Hillage had left and Pierre Moerlin/Mikew howlett had taken over. Wigwam (Anything to do with the PA company?)

Members of levenshulme group Aqua, all present at these gigs eventualy set them selves up as a Gong covers/space rock band shortly after... key Aqua member Graham Clark later went on to be in Gong during the 1980s /90s as the violinist.
Graham Clark also has performed in many Gong off shoot projects including groups with Founder member Daevid Allen.
Daevid Allen was an important figure in the 60s counter culture forming not only Gong but also being an origenal member of Soft Machine and pioneer of the UFO club along side Pink Floyd and Jimi Hendrix.
It was a great thrill for me to have him as a guest on my sofa for a few days whilst he was up here doing the Witchwood or some such in the mid 90s.
Graham and I took him out Raving at a warehouse party in Sparkle street ,where Daevid in his late 60s stood on a podium and led the whole thing like the Pied Piper he is.
Graham and I also went and performed at the Gong Unconvention 2006 in Amsterdam, a 3 day event for Gong fans from around the world. We performed a duo set as Toolshed Lite. Daevid performed several times over the weekend and the sunday night climaxed in a full Gong reunion (well those ones who are alive). Daevid now in his 70s and very much the performer..
Artefact added : 5th June 2007
by graham

Big Block 454 Says –
Wigwam were the Finnish band (with an English singer) that Virgin were pushing at the time.
If you'd like to leave a comment, please Login. Login
Manchester Digital Music Archive is licensed under an
Attribution-NonCommercial-ShareAlike 4.0 International License.
Charity no. 1164179
Our archive currently contains 3745 Bands, 739 DJs, 1423 Venues, 277 Industry Professionals and 27961 artefacts contributed by 3878 members.