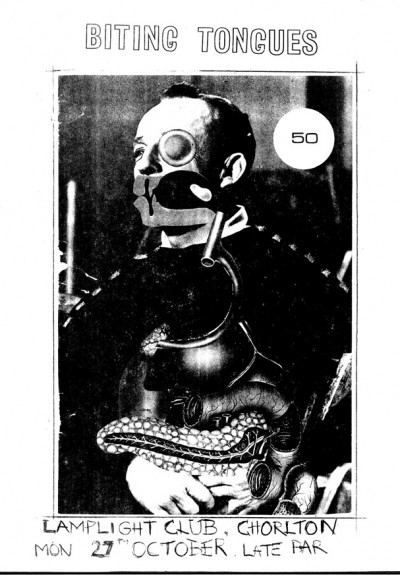 One of the features of the Lamplight club (situated above where pizza hut is on wilbraham rd) was the decibelometer which cut your electric off if you went anywhere near loud-we developed a new style that embraced drum solo s a lot .
I think The support band was Dave Prescott -a solo synth act
quite odd in 1979.
I also saw The Knives here who were a Chorlton based reggae
flavoured act with Phil Kirby On Drums ,Stalwart on sax and Tom Barnish on Trombone who all played in Biting Tongues later on.
Artefact added : 5th June 2007
by graham

Big Block 454 Says –
Night Visitors played the Lamplight Club regularly during 1979 and 1980 - that decibel meter (an orange ball above the stage) used to cut us off a lot.
If you'd like to leave a comment, please Login. Login
Manchester Digital Music Archive is licensed under an
Attribution-NonCommercial-ShareAlike 4.0 International License.
Charity no. 1164179
Our archive currently contains 3706 Bands, 737 DJs, 1361 Venues, 245 Industry Professionals and 24878 artefacts contributed by 3734 members.