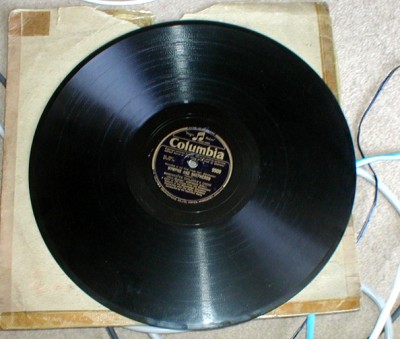 Ive borrowed this off my mum , Its a 78 of The Manchester Childrens Choir..doing Nymphs and Shepherds at The Freetrade Hall. Choir Mistress Gertrude Riall,a choir of 250 voices from the elementary schools of the Manchester education commitee with the Halle Orchestra conducted by Sir Hamilton Harty (you couldnt make it up)
1929 ! now thats what i call old school ...got to be one of the ealiest mcr location recordings? unless you know otherwise
Artefact added : 11th June 2007
by graham

grahamread Says –
My Aunt (Madge Summerhill nee Read) was one of the childrens voices on this recording. Sadly Aunty Madge died last weekend. I am trying to find an MP3 copy of this record so that we can preserve the memory for our extended family. If anyone can assist please let me know.

dorothyp Says –
A low-priced CD with the Manchester School children's Choir is available from Amazon Books. I ordered a copy because my mother and aunt were in the choir.

TomUK Says –
I'm another whos mum was in the choir. The B-side, an exerpt from the opera 'Hansel and Gretel' by Engelbert Humperdink (the composer not the singer!) was also superb. The record was played on BBC radio regularly for at least 30 years, being constantly asked for on request programmes. It still crops up on Radio 3 now and then.
In 1979 on the 50th anniversary of the recording, Granada TV made a one hour documentray telling the story of that epic day. My mum was probably one of the oldest surviving members until her death on November 2nd, 2009 at the age of 93.
For mum's funeral a friend downloaded it onto a CD from the internet - so it's out there somewhere. It is also available on some compilation CD's.

Derek Eaton Says –
Just acquired CD fom Beulah "Hamilton Harty, Composer, Conductor, Arranger". Contains 'Nymphs and Shephers" and dance duet from 'Hansel and Gretel'. My mother was a member of the choir as Hilda Britland from Nelson St, Beswick. She was at Birley Street School. Am looking forward to playing the disc to her in the next few days. She is 95 and enjoying life at her nursing home.
DerekE 04/01/10

afg Says –
Derek - My Mum was also at Birley Street School and sang in the choir - almost certainly with you mother. Her name was Joan Carroll. Next time you see your mum ask her if she remembers Joan Carroll. She wore glasses (but did she then I wonder?), was musical and played the piano very well even as a little girl.

TomUK Says –
Great to hear that two of the original ladies are still with us. I wonder if they attended the 50th anniversary re-union at the Free Trade Hall in 1979 when many of the original members gathered again to sing their song. This event and the build up to it were covered by the Granada documentray mentoned above.
Choir member, Mr. Stanley Rose was the main organiser of the event and coincidentally, he was my pal's father-in-law.
Tom - 09/01/2010

Derek Eaton Says –
Thanks to afg & TomUK. Mum missed the 1979 reunion - only learning about the event after it was covered by Granada at the time. Was able to play the disc to her fairly recently. Whilst she thoroughly enjoyed listening to it again individual names meant little to her, sadly. She passed away peacefully on 18th March - three months short of her 96th birthday.
Regards, DerekE 19/06/10

Paul_AUST Says –
This was in "This England" magazine, which my grandmother gets. She said she was in the choir when they recorded that track, she thinks she was 14 at the time. She's 97 next month so it doesn't quite add up, but whatever! There was a photo of the whole choir which she was in, but from the magazine picture we couldn't make out which one is her. BTW her name is Irene Merrick (nee Corker).

Abigail Says –
Has everyone seen the news that Victoria Wood has written a play about the Manchester Children's Choir for the International Festival? mif.co.uk/mif-cre...

TomUK Says –
This will be quite interesting, but from the snippets I've read about the production, there will be a bit of artistic licence used. It is a drama production rather than a documentary. They also keep rattling on about it being the poorest children from Manchester schools who were chosen. Not so - they came from all types of family background.

grahamread Says –
First of all, thank you to everyone for your help - I was able to buy the CD from Beulah soon after I posted my first comment. The news about Victoria Wood is interesting. But the choir was definitely not made up of the "poorest" children.

Derek Eaton Says –
01/04/11. Am looking forward this this production at the Opera House. We have tickets so will reserve judgement until then. I agree that the choir was for all children but I remember my mum telling me that it was very competitive to be included. Mum and her niece and comtemporary were at Birley St. school together. Mum was selected but her niece was not - oh dear!

TomUK Says –
Although my mum's family were by no means rich, her father had a steady job and they could pay their way. She attended Falowfield High School for Girls at the time. Stanley Rose the instigator of the re-union was also not from a poor family. He attended high school as well. Both were at school at an age when many other children were already working for a living.l

Paul_AUST Says –
I'll ask my grandmother which school she went to. As far as being poor kids, I'm pretty sure she didn't qualify as they had the only car in the village!

OT Says –
So what did anyone make of the Victoria Wood musical? My partner LOVED it!

Vivian Says –
My mother Dora Pollitt was one of the singers on this record. She'a now Dora Wightman and she lives in Braunton - Devon. She's 88 and still going strong, though she says she's feeling her age!!!!!!!!!!!!!!

Vivian Says –
I've spoken to my mother and she went to school in Worseley. There were 2 pupils who joined the choir from that school, my mother (Dora Pollitt) and Tommy Hope (Macnemara). Their headmaster knew Hamilton Harty and he wanted those two because of their good singing voices. My mother thinks they went with the headmaster by tram into Manchester.

Abigail Says –
Thanks for the information, Vivian.

I hope you don't mind me posting on your page, I am currently working on a documentary for BBC 2 following Victoria Wood and the making of her film Tubby and Enid, a television adaptation of her stage show That day We sang. I have been Looking at the history of the time and the way vinyl was cut in particular in 1929 when the record Nymphs and Shepherds would have been recorded by the Manchester school children's choir and the Halle Orchestra. I thought i would post on this page to ask if by any chance there is anyone out there that I might able to contact who might have been part of this incredible choir and music moment for Manchester?
Once again apologise for the long message, I look forward to hearing from you soon.
Thanks

TomUK Says –
Hi Alessandra
I was interested to read about the "Tubby and Enid" project in the press. As you will see from the previous posts, my mum, Hilda Bancroft, was a choir member, then aged 13. I would think your chances of tracing anyone involved on the day are now very slim. It was 85 years ago and any surviving children would be almost 100 years old. However, good luck with the production, I look forward to seeing the final results.
Best wishes - Tom

david.plumb Says –
My mother Olive Plumb was also one of the choir and at 98 and still alive and kicking still has the certificate and the 78 record and she is a bit bored,

david.plumb Says –
if you are interested in talking to her you can contact her on o.plumb@icloud.com or if her iPad I switched on you could FaceTime her

TomUK Says –
Great to hear your mum's still going strong David. Sounds like she would be a valuable source of information for Alessandra.
Can't be many others left now, all these years later.

aledavanzo Says –
Dear David, thank you so much for your reply, and great to hear your mum is doing well. I am sure the director I am working with would love to speak to your mum and about her time with the choir.
Once again thank you for taking the time to respond. Please send your mum my best regards
alessandra

david.plumb Says –
Will let her know, she was concerned when I spoke to her that she might be asked to sing, but is looking forward hopefully to speaking to whoever, cheers

david.plumb Says –
Will let her know, she was concerned when I spoke to her that she might be asked to sing, but is looking forward hopefully to speaking to whoever, cheers

cinephonics Says –
Hello, I worked on Tubby and Enid and supplied them with the props for the Vinyl cutting scene, ie microphones and a vinyl cutter. I know all about record cutting of that era. If you need any information let me know

Deepest apologise for not being in touch sooner, I have been away on another job and I have only just returned.
David, please do let your mum know that we would not at all require her to sing. If it is still ok to do so I thought I could email her to say hello,, how would you feel about me doing this? Best Wishes Alessandra

aledavanzo Says –
Hello Cinephonics, Thank you for your reply to my previous post. I was wondering if maybe you had an email address I could send you a quick email?

No it would be perfectly alright to email my mum, she only asked the other day if it had died a death and I said i didn't know, so she will be surprised,

fionaj Says –
Hi All,
My name is Fiona and I've just started working on the documentary about the choir. After a hiatus we're now back up and running and we'll be looking at a few different themes. David, I've emailed your mum, I can only apologise that nobody was in touch with her earlier. Tom - is there any chance I could contact you directly?
I'm really keen to get in touch with any family members of Stanley Rose. My email address is jones_fiona@hotmail.com.
Many thanks, Fiona

Badger Says –
My father Victor Pryke was in the Manchester Children's Choir singing Nymphs & Shepherds - would love to find a list of the names of those who were in the choir so that I can pass it on to my children for keepsake. My email is dprstaff@yahoo.co.uk if anyone knows where I might find this information. Thanks Graham

Geraldine125 Says –
Met Stanley Rose whilst I was nursing at Manchester Royal Infirmary,it was not long after the first reunion.
He was so proud of getting so many of the singers together again.
A delightful man.
If you'd like to leave a comment, please Login. Login
Manchester Digital Music Archive is licensed under an
Attribution-NonCommercial-ShareAlike 4.0 International License.
Charity no. 1164179
Our archive currently contains 3734 Bands, 739 DJs, 1424 Venues, 260 Industry Professionals and 27890 artefacts contributed by 3853 members.