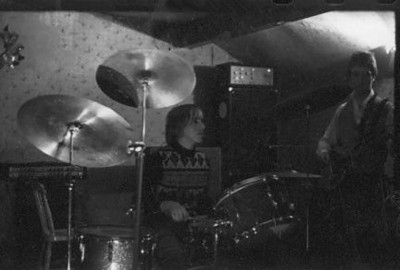 mat Says –
was that because of his jumper!

gbowler Says –
This shot is taken at the rehearsal space in the loft at the 'lads' club, opposite the college. This line up is with a fantastic guitarist called 'Sammy', he had a great rock/jazz style. Steve Cooke was on bass and myself on drums...I have a rehearsal tape from this.

For anyone interested the kit here is a 4 peice, blue sparkle 'Premier'.

As for the jumper...well...apologies, not really 'rock!' was it...bloody cold in there though.

And the Motorhead job...now there's a story.

Arnie Says –
Nice to see you on here Garry,would'nt mind hearing that tape !!

Wendy Hayward Says –
Yep, I'd like to hear it too Garry!
If you'd like to leave a comment, please Login. Login
Manchester Digital Music Archive is licensed under an
Attribution-NonCommercial-ShareAlike 4.0 International License.
Charity no. 1164179
Our archive currently contains 3760 Bands, 739 DJs, 1426 Venues, 287 Industry Professionals and 28012 artefacts contributed by 3879 members.