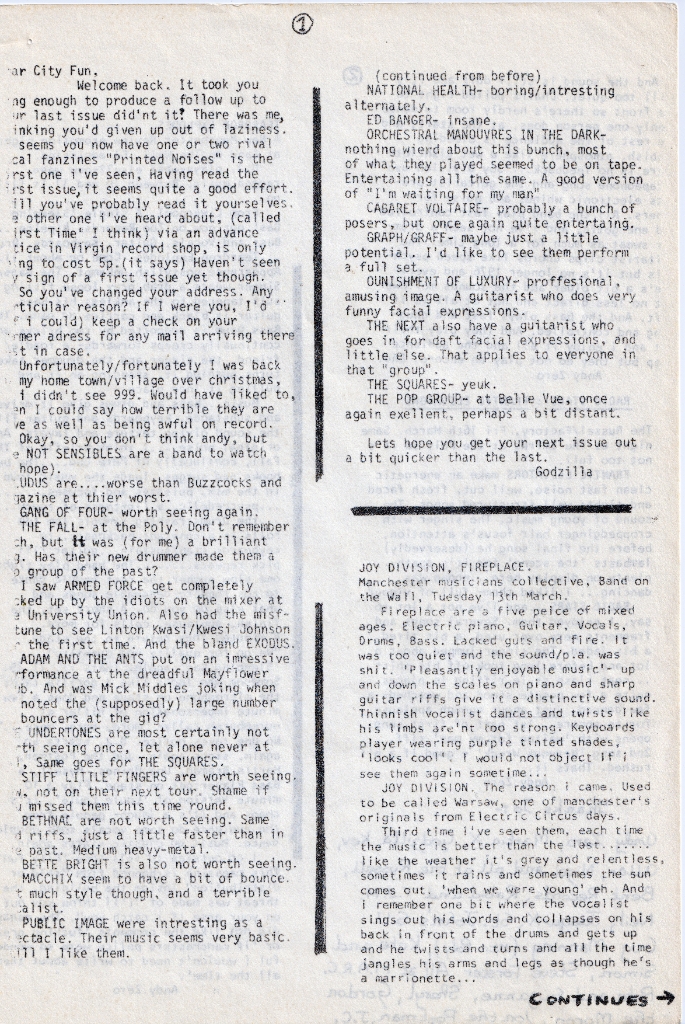 Dear City Fun,
Welcome back. It took you long enough to produce a follow up to your least issue did'nt it! There was me, thinking you'd given up out of laziness. It seems you now have one or two rival local fanzines "Printed Noises" is the first one i've seen. Having read the first issue, it seems quite a good effort. Still you've probably read it yourselves. The other one i've heard about, (called 'First Time' I think) via an advance notice in Virgin record shop, is only going to cost 5p. (it says) Haven't seen any sign of a first issue yet though.
So you've changed your address. Any particular reason? If I were you, I'd (if I could) keep a check on your former address for any mail arriving there just in case.
Unfortunately/fortunately I was back in my home town/vllage over christmas, so i didn't see 999. Would have liked to, then I could say how terrible they are live as well as being awful on record. Okay, so you don't think andy, but the NOT SENSIBLES are a band to watch I hope).
LUDUS are....worse than Buzzcocks and Magazine at thier worst.
GANG OF FOUR - worth seeing again.
THE FALL - at the Poly. Don't remember much, but it was (for me) a brilliant gig. Has their new drummer made them a pop group of the past?
I saw ARMED FORCE get completely fucked up by the idiots on the mixer at the University Union. Also had the misf-ortune to see Linton Kwasi/Kwesi Johnson for the first time. And the bland EXODUS.
ADAM AND THE ANTS put on an impressive performance at the dreadful Mayflower pub. And was Mick Middles when he noted the (supposedly) large number of bouncers at the gig?
THE UNDERTONES are most certainly not worth seeing once, let alone never at all. Same goes for THE SQUARES.
STIFF LITTLE FINGERS are worth seeing now, not on their next tour. Shame if you missed them this time round.
BETHNAL are worth seeing. Same old riffs, just a little faster than in the past. Medium heavy-metal.
BETTE BRIGHT is also not worth seeing.
MACCHIX seem to have a bit of bounce. Not much style though, and a terrible vocalist.
PUBLIC IMAGE were intresting as a spectacle. Their music seems very basic. Still I like them.
(continued from before)
NATIONAL HEALTH- boring/intresting alternately.
ED BANGER- insane.
ORCHESTRAL MANOUVRES IN THE DARK- nothing wierd about this bunch, most of what they played seemed to be on tape. Entertaining all the same. A good version of "I'm waiting for my man"
CABARET VOLTAIRE- probably a bunch of posers, but once again quite entertaing.
GRAPH/GRAFF- maybe just a little potential. I'd like to see them perform a full set.
OUNISHMENT OF LUXURY- proffesional, amusing image. A guitartist who does very funny facial expressions.
THE NEXT have a guitarist who goes in for daft facial expressions, and little else. That applies to everyone in that "group".
THE SQUARES- yeuk.
THE POP GROUP- at Belle Vue, once again exellent, perhaps a bit distant.
Let's hope you get your next issue out a bit quicker than the last.
Godzilla
JOY DIVISION, FIREPLACE.
Manchester musicians collective, Band on the Wall, Tuesday 13th March.
Fireplace are a five peice of mixed ages. Electric piano, Guitar, Vocals, Drums, Bass. Lacked guts and fire. It was too quiet and the sound/p.a. was shit. 'Pleasantly enjoyable music'- up and down the scales on piano and sharp guitar riffs give it a distinctive sound. Thinnish vocalist dances and twists like his limbs are'nt too strong. Keyboards player wearing purple tinted shades, 'looks cool'. I would not object if I see them again sometime...
JOY DIVISION. The reason I came. Used to be called Warsaw, one of manchester's originals from Electric Circus das.
Third time I've seen them, each time the music is better than the last...... like the weather it's grey and relentless, sometimes it rains and sometimes the sun comes out. 'when we were young' eh. And i remember one bit where the vocalist sings out his words and collapses on his back in front of the drums and gets up and twists and turns and all the time jangles his arms and legs as though he's a marrionette...
CONTINUES
Artefact added : 10th July 2020
by Mike Noon