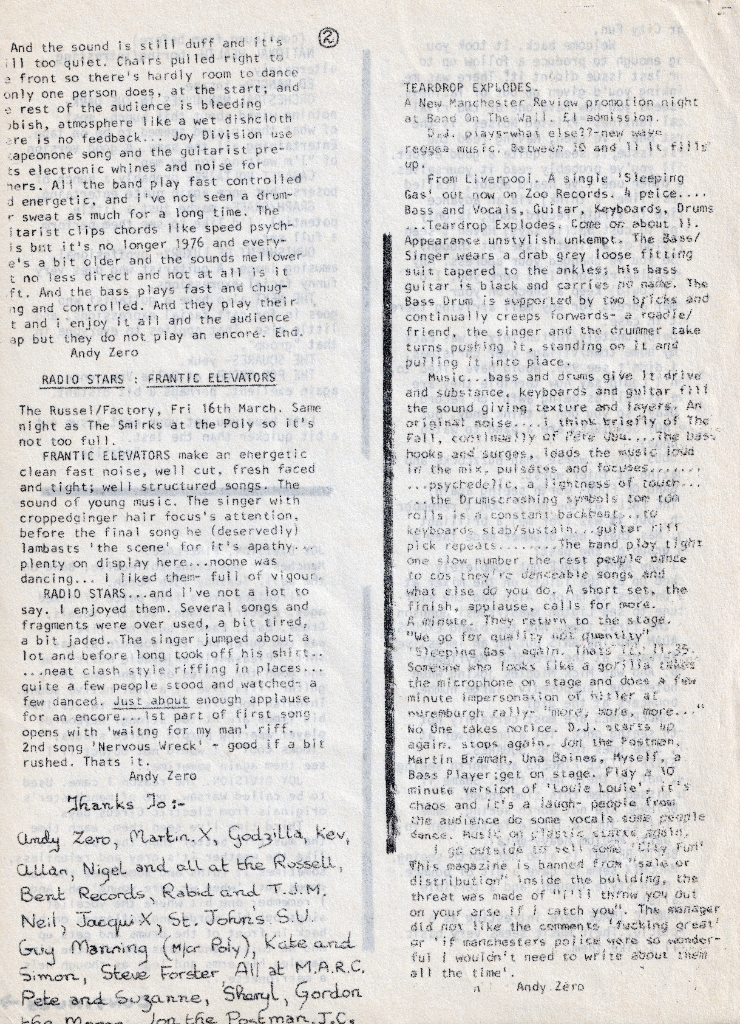 And the sound is still duff and it's still too quiet. Chairs pulled right to the front so there's hardly any room to dance and only one person does, at the start; and the rest of the audience is bleeding rubbish, atmosphere like a wet dishcloth there is no feedback... Joy Division use tapeonone song and the guitarist pre-sets electronic whines and noise for ...ers. All the band play fast controlled and energetic, and i've not seen a drum-mer sweat as much for a long time. The guitarist clips chords like speed psych- [?] but it's no longer 1976 and every-one's a bit older and the sounds mellower but no less direct and not at all is it soft. And the bass player plays fast and chug-ging and controlled. And they play their set and I enjoy it and all the audience clap but they do not play an encore. End.
Andy Zero
RADIO STARS : FRANTIC ELEVATORS
The Russel/Factory, Fri 16th March. Same night as the Smirks as the Poly so it's not too full.
FRANTIC ELEVATORS make an energetic clean fast noise, well cut, fresh faced and tight; well structured songs. The sound of young music. The singer with croppedginger hair focus's attention, before the final song he (deservedly) lambasts 'the scene' for it's apathy... plenty on display here... noone was dancing... I liked them- full of vigour.
RADIO STARS...and i've not a lot to say. I enjoyed them. Several songs and fragments were over used, a bit tired, a bit jaded. The singer jumped about a lot and before long took off his shirt... neat clash style riffing in places... quite a few people stood around and watched- a few danced. Just about enough applause for an encore.... 1st part of first song opens with 'waiting for my man' riff. 2nd song 'Nervous Wreck' - good if a bit rushed. That's it.
Andy Zero
Thanks to:-
andy Zero, Martin.X, Godzilla, Kev, allan, Nigel and all at the Russell, Bent Records, Rabid and T.J.M. Neil, Jacqui X, St. John's S.U. Guy Manning (M/cr Poly), Kate and Simon, Steve Forster, All at M.A.R.C. Pete and Suzanne, Sheryl, Gordon the Moron, Jon the Postman, J.C.
TEARDROP EXPLODES
A New Manchester Review promotion night at Band on the Wall. £1 admission.
D.J. plays-what else??-new wave, reggae music. Between 10 and 11 it fills up.
From Liverpool. A single 'Sleeping Gas' out now on Zoo Records. 4 peice.... Bass and vocals, Guitar, Keyboards, Drums... Teardrop Explodes. Come on about 11. Appearance unstylish unkempt. The Bass/Singer wears a drab grey loose fitting suit tapered to the ankles; his bass guitar is black and carries no name. The Bass Drum is supported by two bricks and continually creeps forwards- a roadie/friend, the singer and the drummer take turns pushing it, standing on it and pulling it into place.
Music...bass and drums give it drive and substance, keyboards and guitar fill the sound giving texture and layers. An original noise...I think briefly of The Fall, continually of Pere Ubu....The bass hooks and surges, leads the music loud in the mix, pulsates and focuses....psychedelic, a lightness of touch... the Drumscrashing symbols tom tom rolls is a constant backbeat... to keyboards stab/sustain...guitar riff pick repeats....The band play tight one slow number the rest people dance to cos they're danceable songs and what else do you do. A short set, the finish, applause, calls for more. A minute. They return to the stage. "We go for quality no quantity" 'Sleeping Gas' again. That's it. 11.35. Someone who looks like a gorilla takes the microphone on stage and does a few minute impersonation of hitler at nuremburgh rally- "more more, more..." No one takes notice. D.J. starts up again, stops again. Jon the Postman, Martin Bramah, Una Baines, Myself, a Bass Player; get on stage. Play a 10 minute version of 'Louie Louie'. it's chaos and it's a laugh- people from the audience do some vocals some people dance. Music on plastic starts again.
I go outside to sell some 'City Fun'. This magazine is banned from "sale or distribution" inside the building, the threat was made of "i'll throw you out on your arse if I catch you". The manager did not like the comments 'fucking great' or 'if manchesters police were so wonderful I wouldn't need to write about them all the time'.
Andy Zero
Artefact added : 10th July 2020
by Mike Noon