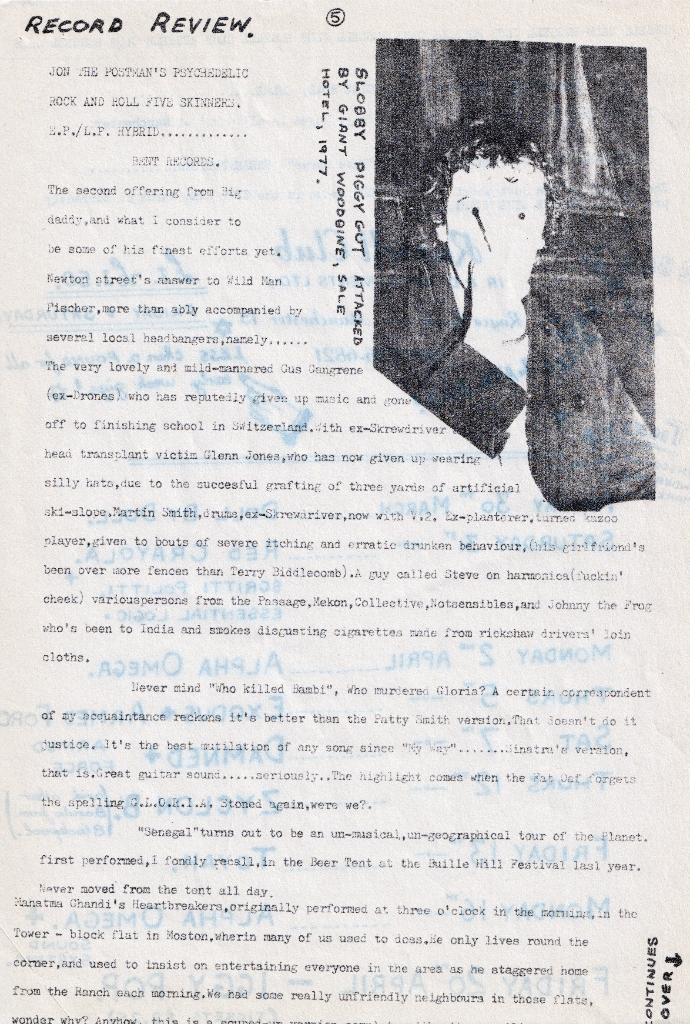 RECORD REVIEW
JON THE POSTMAN'S PSYCHEDELIC ROCK AND ROLL FIVE SKINNERS. E.P./L.P. HYBRID....BENT RECORDS
The second offering from Big daddy,and what I consider to be some of his finest efforts yet. Newton street's answer to Wild Man Fischer,more than ably accompanied by several local headbangers,namely.... The very lovely and mild-mannered Gus Gangrene (ex-Drones) who has reputedly given up music and gone off to finishing school in Switzerland.With ex-Skrewdriver and head transplant victim Glenn Jones,who has now given up wearing silly hats,due to the successful grafting of three yards of artificial ski-slope.Martin Smith, drums, ex-Skrewdriver,now with V.2. Ex-plasterer, turned kazoo player,given to bouts of severe itching and erratic drunken behaviour, (his girlfriend's been over more fences than Terry Biddlecomb).A guy called Steve on harmonica(fuckin' cheek) variouspersons from the Passage,Mekon,Collective,Notsensibles,and Johnny the Frog who's been to India and smokes disgusting cigarettes made from rickshaw drivers' loin cloths.
Never mind "Who killed Bambi", who murdered Gloria? A certain correspondent of my acquaintance reckons it's better than the Patti Smith version. That doesn't do it justice. It's the best mutilation of any song since "My Way"....Sinatra's version,that is.Great guitar sound... seriously...The highlight comes when the Fat Oaf forgets the spelling G.L.O.R.I.A. Stoned again, were we?
"Senegal" turns out to be an un-musical,un-geographical tour of the Planet. first performed, I fondly recall, in the Beer Tent at the Buille Hill Festival last year. Never moved from the tent all day.
Mahatma Ghandi's Heartbreakers,originally performed at three o'clock in the morning, in the Tower - block flat in Moston,wherein many of us used to doss.He only lives round the corner, and used to insist on entertaining everyone in the area as he staggered home from the Ranch each morning.We had some really unfriendly neighbours in those flats, wonder why? Anyhow, this is a souped-up version, complete with sitar waiing [obscured]
CONTINUES OVER
Artefact added : 10th July 2020
by Mike Noon