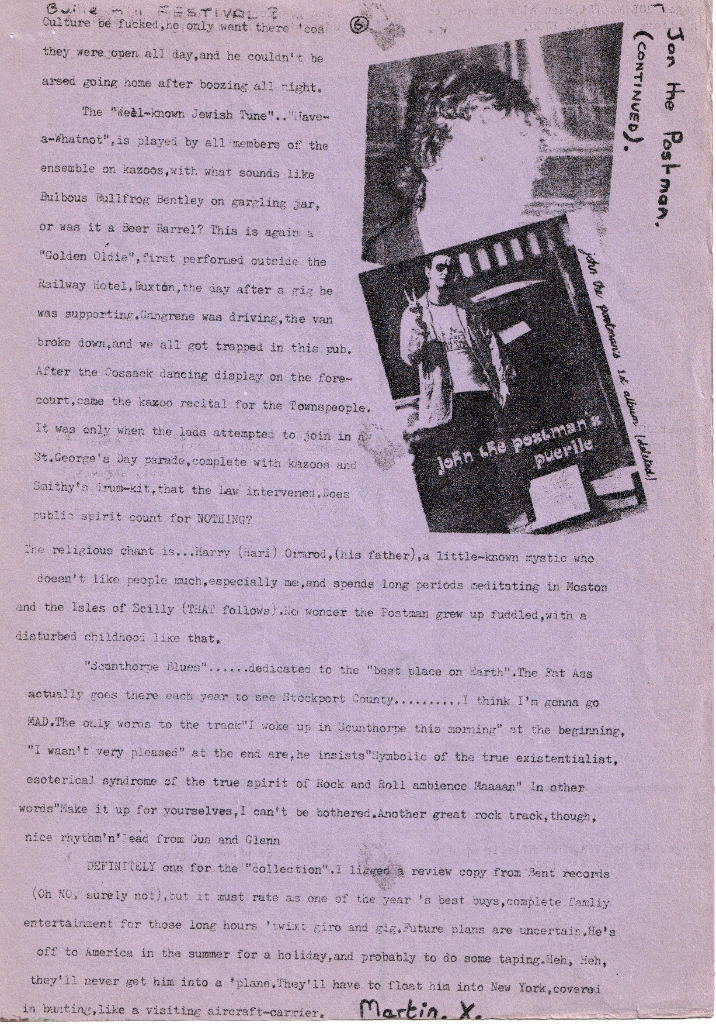 Featuring: Frantic Elevators, Manicured Noise, Jon the Postman, The Things, The Smirks, The Distractions.
Contributors: Andy Zero, Martin X, Godzilla, Kev.
Offices: Russell Club, Royce Road, Hulme, Manchester
TRANSCRIPTION
Jon the Postman.
(CONTINUED).
Buille Hill Festival? Culture be fucked. He only went there 'cos they were open all day,and he couldn't be arsed going home after boozing all night.
The "well-known Jewish Tune".."Have-a-Whatnot", is played by all members of the ensemble on kazoos,with what sounds like Bulbous Bullfrog Bentley on gargling jar, or was it a Beer Barrel? This is again a "Golden Oldie" first performed outside the Railway Hotel, Buxton, the day after a gig he was supporting.Gangrene was driving,the van broke down,and we all got trapped in this pub. After the cossack danding display on the fore-court, came the kazoo recital for the Townspeople. It was only when the lads attempted to join in a St.George's Day parade, complete with kazoos and Smithy's drum-kit that the law intervened.Does public spirit count for NOTHING?
The religious chant is....Harry (Hari) Ormrod,(his father), a little-known mysti who doesn't like people much,especially me,and spends long periods meditating in Moston and the Isles of Scilly (THAT follows). No wonder the Postman grew up fuddled,with a disturbed childhood like that.
"Scunthorpe Blues"....dedicated to the "best place on Earth".The Fat Ass actually goes there each year to see Stockport County.....I think I'm gonna go MAD. The only words to the track"I woke up in Scunthorpe this morning" at the beginning, "I wasn't very pleased at the end are,he insists"Symbolic of the true existentialist, esoterical syndrome of the true spirit of Rock and Roll ambience Maaaan" in other words"Make it up for yourselves,I can't be bothered.Another great rock track, though, nice rhythm'n'lead from Gus and Glenn.
DEFINITELY one for the "collection".I ligged a review copy from Bent Records(Oh NO, surely not), but it must rate as one of the year's best buys, complete family entertainment for those long hours 'twixt giro and gig.Future plans are uncertain. He's off to America in the summer for a holiday,and probably to do some taping.Heh, Heh, they'll never get him into a plane.They'll have to float him to New York, covered in bunting,like a visiting aircraft-carrier.
MARTIN. X.
Artefact added : 10th July 2020
by Mike Noon