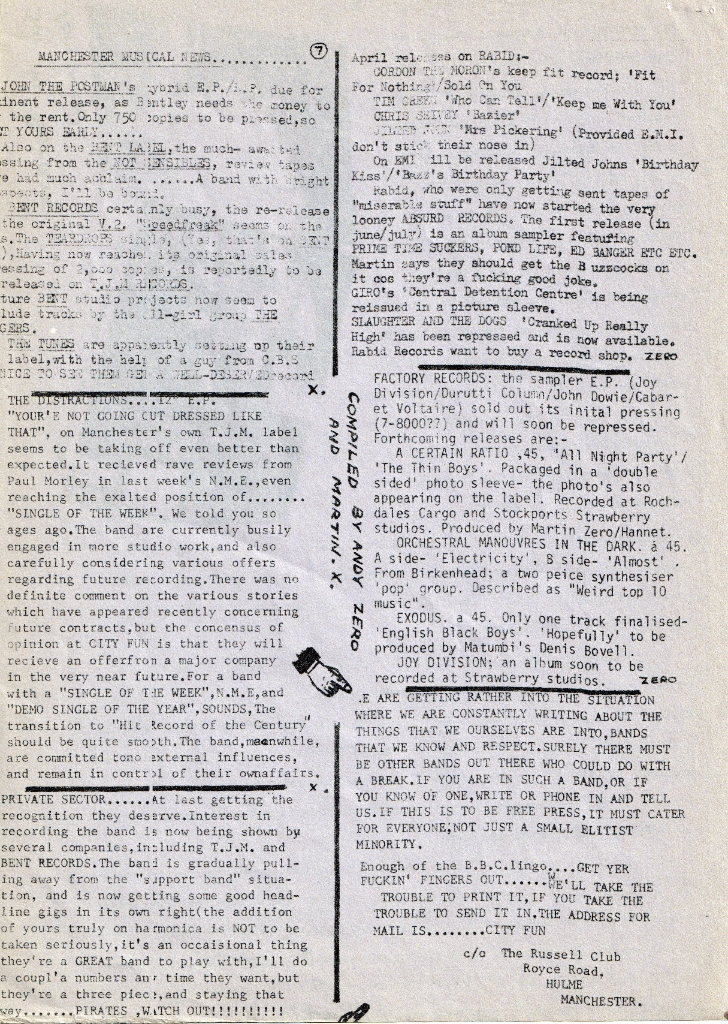 MANCHESTER MUSICAL NEWS
JOHN THE POSTMAN'S Hybrid E.P./L.P. due for imminent release, as Bentley needs the money to pay the rent.Only 750 copies to be pressed,so GET YOURS EARLY....
Also on the BENT LABEL, the much-awaited pressing from the NOT SENSIBLES, review tapes have had much acclaim... A band with bright prospects, I'll be bound.
BENT RECORDS certainly busy, the re-release of the original V.". "Speedfreak" seems on the cards. The TEARDROPS single, (Yes, that's on BENT too), Having now reached its original sales pressing of 2,000 copies, is reportedly to be re-released on T.J.M. RECORDS.
Future BENT studio projects now seem to include tracks by the all-girl group THE LIGGERS.
THE TUNES are apparently setting up their own label,with the help of a guy from C.B.S. NICE TO SEE THEM GET A WELL-DESERVEDrecord.
X.
THE DISTRACTIONS....12" E.P.
"YOUR'E NOT GOING OUT DRESSED LIKE THAT", on Manchester's own T.J.M. label seems to be taking off even better than expected.It received rave reviews from Paul Morley in last week's N.M.E., even reaching the exalted position of.... "SINGLE OF THE WEEK". We told you so ages ago. The band are currently busily engaged in more studio work,and also carefully considering various offers regarding future recording. There was no definite comment on the various stories which have appeared recently concerning future contracts, but the consensus of opinion at CITY FUN is that they will recieve an offerfrom a major company in the very near future. For a band with a "SINGLE OF THE WEEK", N.M.E. and "DEMO SINGLE OF THE YEAR", SOUNDS, The transition to "Hit Record of the Century" should be quite smooth.The band, meanwhile, are committed to no external influences,and remain in control of their ownaffairs.
X.
PRIVATE SECTOR.....At last getting the recognition they deserve. Interest in recording the band is now being shown by several companies, including T.J.M. and BENT RECORDS. The band is gradually pull-ing away from the "support band" situation, and is now getting some good head-line gigs in its own right (the addition of yours truly on harmonica is NOT to be taken seriously, it's an occaisional thing they're a great band to play with,I'll do a coupl'a numbers any time they want, but they're a three piece and staying that way....PIRATES, WATCH OUT!!!!!!!!!!!!!!
April releases on Rabid:-
GORDON THE MORON's keep fit record; 'Fit For Nothing'/'Sold On You'
TIM GREEN 'Who Can Tell'/'Keep me With You'
CHRIS SEIVEY 'Bazier'
JILTED JOHN 'Mrs Pickering' (Provided E.M.I. don't stick their nose in)
On EMI will be released Jilted Johns 'Birthday Kiss'/'Bazz's Birthday Party'
Rabid, who were only getting sent tapes of "miserable stuff" have now started the very looney ABSURD RECORDS. The first release (in june/july) is an album sampler featuring PRIME TIME SUCKERS, POND LIFE, ED BANGER ETC ETC.
Martin says they should get the B uzzcocks on it cos they're a fucking good joke.
GIRO's 'Central Detention Centre' is being reissued in a picture sleeve.
SLAUGHTER AND THE DOGS 'Cranked Up Really Hight' has been repressed and is now available.
Rabid Records want to buy a record shop.
FACTORY RECORDS: the sampler E.P (Joy Division / Durutti Column/John Dowie/Cabaret Voltaire) sold out its initial pressing (7-8000?) and will soon be repressed.
Forthcoming releases are:-
A CERTAIN RATIO , 45, 'All Night Party' / 'The Thin Boys'. Packaged in a 'double sided' photo sleeve- the photo's also appearing on the label. Recorded at Roch-dales Cargo and Stockports Strawberry studios. Produced by Martin Zero/Hannet.
ORCHESTRAL MANOUVRES IN THE DARK. a 45. A side- 'Electricity'. B side- 'Almost'. From Birkenhead: a two peice synthesiser 'pop' group. Described as "Weird top 10 music".
EXODUS. a 45. Only one track finalised- 'English Black Boys'. 'Hopefully' to be produced by Matumbi's Denis Bovell.
JOY DIVISION: an album soon to be recorded at Strawberry Studios.
ZERO
WE ARE GETTING RATHER INTO THE SITUATION WHERE WE ARE CONSTANTLY WRITING ABOUT THE THINGS WE OURSELVES ARE INTO, BANDS THAT WE KNOW AND RESPECT. SURELY THERE MUST BE OTHER BANDS OUT THERE WHO COULD DO WITH A BREAK. IF YOU ARE IN SUCH A BAND,OR IF YOU KNOW OF ONE, WRITE OR PHONE IN AND TELL US. IF THIS IS TO BE FREE PRESS, IT MUST CATER FOR EVERYONE, NOT JUST A SMALL ELITIST MINORITY.
Enough of the B.B.C. lingo....GET YER FUCKIN' FINGERS OUT...WE'LL TAKE THE TROUBLE TO PRINT IT, IF YOU TAKE THE TROUBLE TO SEND IT IN. THE ADDRESS FOR MAIL IS ..... CITY FUN c/o The Russell Club, Royce Road, HULME, MANCHESTER.
Artefact added : 10th July 2020
by Mike Noon