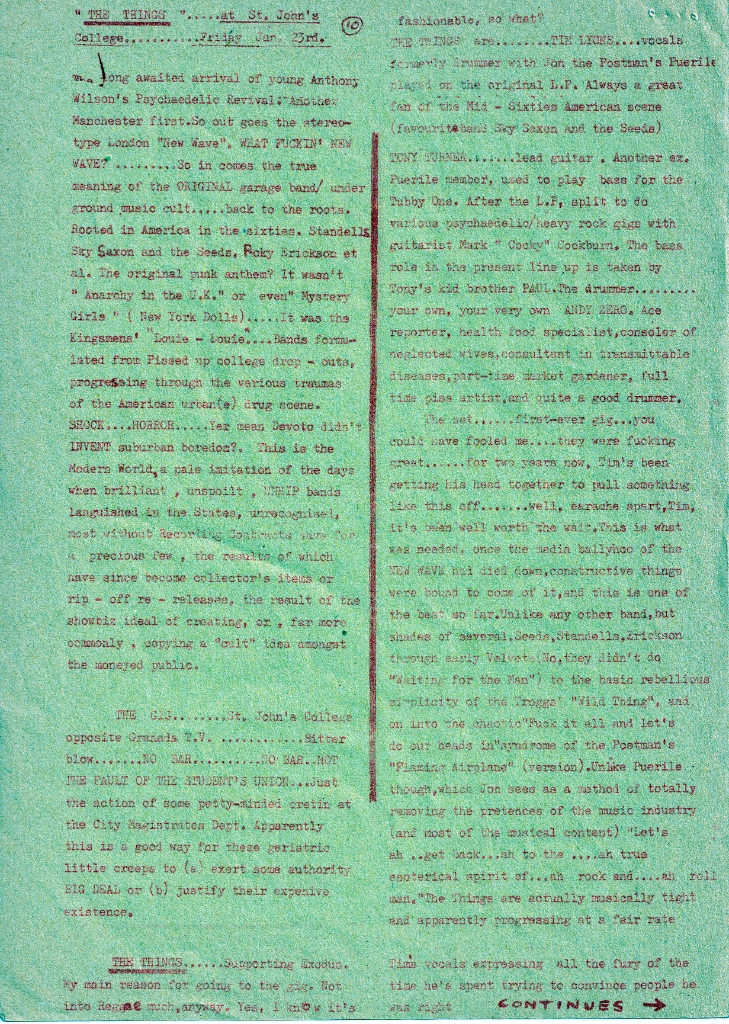 Featuring: Frantic Elevators, Manicured Noise, Jon the Postman, The Things, The Smirks, The Distractions.
Contributors: Andy Zero, Martin X, Godzilla, Kev.
Offices: Russell Club, Royce Road, Hulme, Manchester
TRANSCRIPTION
“THE THINGS”….at St. John’s College…Friday Jan. 23rd.
The long awaited arrival of young Anthony Wilson’s Psychedelic Revival: Another Manchester first.So out goes the stereo-type London “New Wave”. WHAT FUCKIN’ NEW WAVE? ……So in comes the true meaning of the ORIGINAL garage band/ under ground music cult…..back to the roots. Rooted in America in the sixties. Standells, Sky Saxon and the Seeds. Roky Erickson et al. The original punk anthem? It wasn’t “Anarchy in the U.K.” or even “Mystery Girls” (New York Dolls)…..It was the Kingsmens’ “Louie-Louie”…Bands formulated from Pissed up college drop-outs, progressing through the various traumas of the American urban€ drug scene. SHOCK..HORROR….Yer mean Devoto didn’t INVENT suburban boredom?. This is the Modern World, a pale imitation of the days when brilliant, unspoilt, UNHIP bands languished in the States, unrecognised, most without Recording Contracts save for a precious few, the results of which have since become collector’s items or rip-off re-releases, the result of the showbiz ideal of creating, or, far more commonly, copying a “cult” idea amongst the moneyed public.
THE GIG…..St. John’s College opposite Granada T.V. …..Bitter blow….. NO BAR…. NO BAR..NOT THE FAULT OF THE STUDENT’S UNION…Just the action of some petty-minded cretin at the City Magistrates Dept. Apparently this is a good way for these geriatric little creeps to (a) exert some authority BIG DEAL or (b) justify their expenive existence.
THE THINGS…..Supporting Exodus. My main reason for going to the gig. Not into Reggae much,anyway. Yes, I know It’s fashionable, so what?
THE THINGS are ………..TIM LYONS….vocals formerly drummer with Jon the Postman’s Puerile, played on the orirginal L.P. Always a great fan of the Mid-Sixties American scene (favourite band Sky Saxon and the Seeds) TONY TURNER….lead guitar. Another ex. Puerile member, used to play bass for the Tubby One. After the L.P. split to do various psychaedelic/heavy rock gigs with guitarist Mark “Cocky” Cockburn. The bass role in the present line up is taken by Tony’s kid brother PAUL.The drummer………. your own, your very own ANDY ZERO. Ace reporter, health food specialist, consoler of neglected wives,consultant in transmittable diseases,part-time market gardener, full time piss artist,and quite a good drummer.
The set….first-ever gig…you could have fooled me…they were fucking great….for two years now, Tim’s been getting his head together to pull something like this off…..well, earache apart,Tim,it’s been well worth the wait.This is what was needed, once the media ballyhoo of the NEW WAVE had died down,constructive things were bound to come of it,and this is one of the best so far.Unlike any other band,but shades of several.Seeds,Standells,Erickson through early Velvets(No, they didn’t do “Waiting for the Man”) to the basic rebellious simplicity of the Troggs’ “Wild Thing”, and on into the chaotic”Fuck it all and let’s do our heads in”syndrome of the Postman’s “Flaming Airplane” (version).Unlike Puerile though,which Jon sees as a method of totally removing the pretences of the music industry (and most of the musical content) “Let’s ah… get back….ah to the ….ah true esoterical spirit of …ah rock and ….ah roll man. “The Things” are actually musically tight and apparently progressing at a fair rate.
Tim’s vocals expressing all the fury of the time he’s spent trying to convince people he was right.
CONTINUES
Artefact added : 10th July 2020
by Mike Noon