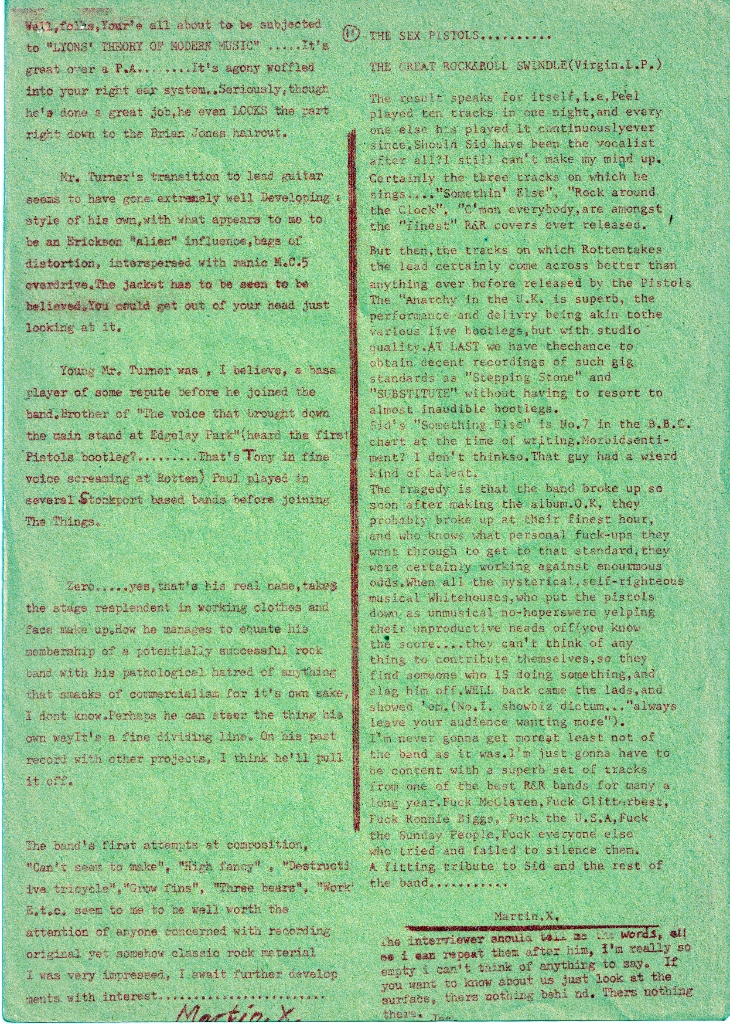 Featuring: Frantic Elevators, Manicured Noise, Jon the Postman, The Things, The Smirks, The Distractions.
Contributors: Andy Zero, Martin X, Godzilla, Kev.
Offices: Russell Club, Royce Road, Hulme, Manchester
Well,folks,Your’s all about to be subjected to “LYONS’ THEORY OF MODERN MUSIC” ….It’s great over a P.A. …. It’s agony woffled into your right ear system..Seriously, though he’s done a great job,he even LOOKS the part right down to the Brian Jones haircut.
Mr.Turner’s transition to lead guitar seems to have gone extremely well. Developing a style of his own,with what appears to me to to be an Erickson “alien” influence,bags of distortion, interspersed with manic M.C.5 overdrive.The jacket has to be seen to be believed.You could get out of your head just looking at it.
Young Mr. Turner was, I believe, a bass player of some repute before he joined the band.Brother of “The voice that brought down the main stand at Edgeley Park”(heard the first Pistols bootleg?....That’s Tony in fine voice screaming at Rotten) Paul played in several Stockport based bands before joining The Things.
Zero..yes, that’s his real name, take the stage resplendent in working clothes and face make up.How he manages to equate his membership of a potentially successful rock band with his pathological hatred of anything that smacks of commercialism for it’s own sake, I don’t know.Perhaps he can steer the thing his own way. It’s a fine dividing line. On his past record with other projects, I think he’ll pull it off.
The band’s first attempts at composition, “Can’t seem to make”, “High fancy”, “Destructive tricycle”,”Grow fins”, “Three bears”, “Work” E.t.c. seem to be well worth the attention of anyone concerned with recording original yet somehow classical rock material. I was very impressed, I await further developments with interest…………
Martin. X.
THE SEX PISTOLS……..
THE GREAT ROCK&ROLL SWINDLE(Virgin.L.P.)
The result speaks for itself, i.e. Peel played ten tracks in one night,and every one else has played it continuouslyever since.Should Sid have been the vocalist after all?I still can’t make my mind up. Certainly the three tracks on which he sings….. “Somethin’ Else”, “Rock around the Clock”, “C’mon everybody, are amongst the “finest” R&R covers ever released.
But then the tracks on which Rottentakes the lead certainly come across better than anything ever before released by the Pistols. The “Anarchy in the U.K. is superb, the performance and delivery being akin to the various live bootlegs,but with studio quality.AT LAST we have thechance to obtain decent recordings of such gig standards as “Stepping Stone” and “SUBSTITUTE” without having to resort to almost inaudible bootlegs.
Sid’s “Something Else” is No.7 in the B.B.C. chart at the time of writing.Morbidsentiment? I don’t thinkso.That guy had a weird kind of talent.
The tragedy is that the band broke up so soon after making the album.O.K, they probably broke up at their finest hour, and who knows what personal fuck-ups the went through to get to that standard, they were certainly working against enourmous odds.When all the hysterical,self-righteous musical Whitehouses,who put the pistols down as unmusical no-hoperswere yelping the score….they can’t think of any thing to contribute themselves,so they find someone who IS doing something, and slag him off.WELL back came the lads, and showed ‘em. (No.I. showbiz dictum…”always leave your audience wanting more”).
I’m never gonna get more at least not of the band as it was.I’m just gonna have to be content with a superb set of tracks from one of the best R&R bands for many a long year.Fuck McClaren,Fuck Glitterbest, Fuck Ronnie Biggs, Fuck the U.S.A,Fuck the Sunday People,Fuck everyone else who tried and failed to silence them. A fitting tribute to Sid and the rest of the band………
Martin. X.
The interviewer should tell me the words, all so i can repeat them after him, i'm really so empty i can’t think of anything to say. If you want to know about us just look at the surface, thers nothing behi nd. Thers nothing there.
Jez.
Artefact added : 10th July 2020
by Mike Noon