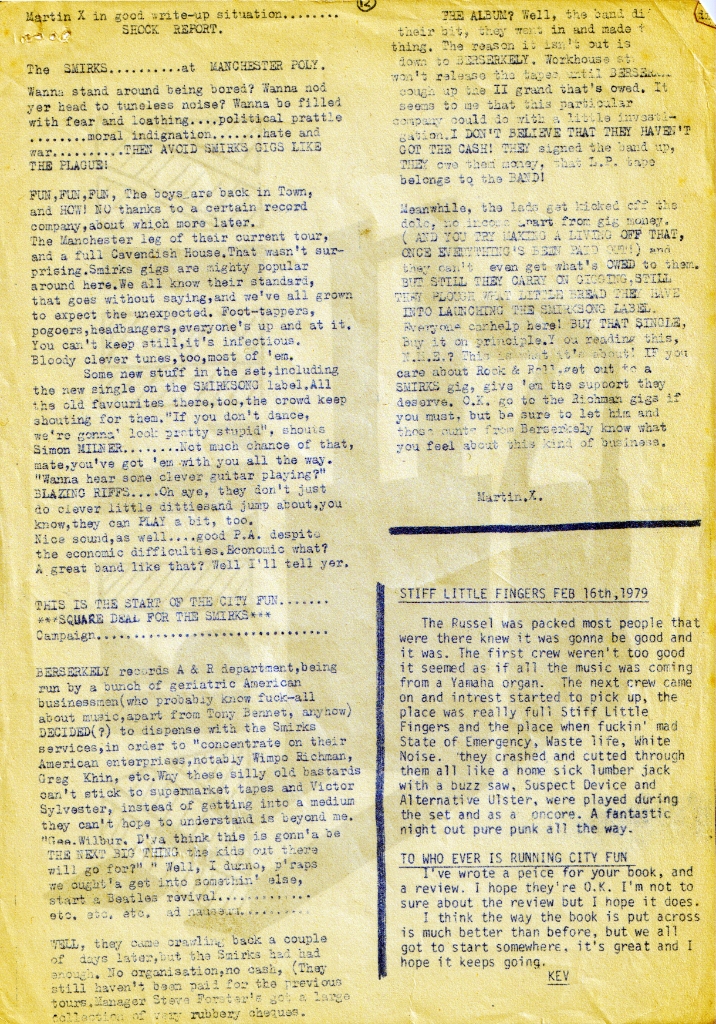 Featuring: Frantic Elevators, Manicured Noise, Jon the Postman, The Things, The Smirks, The Distractions.
Contributors: Andy Zero, Martin X, Godzilla, Kev.
Offices: Russell Club, Royce Road, Hulme, Manchester
TRANSCRIPTION:
Martin X in good write-up situation… SHOCK REPORT
The SMIRKS…. at MANCHESTER POLY.
Wanna stand around being bored? Wanna nod yer head to tuneless noise? Wanna be filled with fear and loathing….political prattle …. moral indignation…. hate and war….THEN AVOID SMIRKS GIGS LIKE THE PLAGUE!
FUN, FUN, FUN, The boys are back in Town, and HOW! NO thanks to a certain record company, about which more later.
The Manchester leg of their current tour, and a full Cavendish House. That wasn’t suprising.Smirks gigs are highly popular around here. We all know their standard, that goes without saying, and we’ve all grown to expect the unexpected. Foot-tappers, pogoers, headbangers, everyone’s up and at it. You can’t keep still, it’s infectious. Bloody clever tunes, too, most of ‘em.
Some new stuff in the set, including the new single on the SMIRKSONG label.All the old favourites there,too, the crowd keep shouting for them. “If you don’t dance, we’re gonna look pretty stupid”, shouts Simon MILNER….Not much chance of that, mate, you’ve got ‘em with you all the way. “Wanna hear some clever guitar playing?” BLAZING RIFFS…Oh aye, they don’t just do clever little ditties and jump about, you know, they can PLAY a bit, too.
Nice sound, as well….good P.A. despite the economic difficulties. Economic what? A great band like that? Well I’ll tell yer.
THIS IS THE START OF THE CITY FUN…….. ***SQUARE DEAL FOR THE SMIRKS*** …..Campaign…………
BERSERKELY records A&R department,being run by a bunch of geriatric American businessmen(who probably know fuck-all about music,apart from Tony Bennet, anyhow) DECIDED(?) to dispense with the Smirks services, in order to “concentrate on their American enterprises, notably Wimpo Richman, Greg Kihn, etc. Why these silly old bastards can’t stick to supermarket tapes and Victor Sylvester, instead of getting into a medium they can’t hope to understand is beyond me. “Gee, Wilbur. D’ya think this is gonn’a be THE NEXT BIG THING the kids out there will go for?” “Well, I dunno, p’raps we ought’a get into somethin’ else, start a Beatles revival….etc. etc. etc. ad nauseum…….
WELL, they came crawling back a couple of days later,but the Smirks had had enough. No organisation, no cash. (They still haven’t been paid for the previous tours. Manage Steve Forster’s got a large collection of very rubbery cheques.
THE ALBUM? Well, the band did their bit, they went in and made the thing. The reason it isn’t out is down to BERSERKELY. Workhouse st won’t release the tapes until BERSERKELY cough up the II grand that’s owed. It seems to me that this particular company could do with a little investigation. I DON’T BELIEVE THAT THEY HAVEN’T GOT THE CASH! THEY signed the band up, THEY owe them money, that L.P. tape belongs to the BAND!
Meanwhile the lads get kicked off the dole, no income apart from gig money. (AND YOU TRY MAKING A LIVING OFF THAT, ONCE EVERYTHING’S BEEN PAID OUT!) and they can’t even get what’s OWED to them. BUT STILL THEY CARRY ON GIGGING, STILL THEY PLOUGH WHAT LITTLE BREAD THEY HAVE INTO LAUNCHING THE SMIRKSONG LABEL. Everyone canhelp here! BUY THAT SINGLE, Buy it on principle! You reading this, N.M.E.? This is what it’s about! IF you care about Rock & Roll, get out to a Smirks gig, give ‘em the support they deserve. O.K. go the Richman gigs if you must, but be sure to let him and those cunts from Berserkely know what you feel about this kind of business.
Martin.X.
STIFF LITTLE FINGERS FEB 16TH, 1979
The Russel was packed most people that was there knew it was gonna be good and it was. The first crew weren’t too good it seemed as if all the music was coming from a Yamaha organ. The next crew came on and intrest started to pick up, the place was really full Stiff Little Fingers and the place when fuckin’ mad Stage of Emergency, Waste life, White Noise. they crashed and cutted through them all like a home sick lumber jack with a buzz saw, Suspect Device and Alternative Ulster, were played during the set and as an oncore. A fantastic night out pure punk all the way.
TO WHO EVER IS RUNNING CITY FUN
I’ve wrote a piece for your book, and a review. I hope they’re O.K. I’m not to sure about the review but I hope it does. I think the way the book is put across is much better than before, but we all got to start somewhere , it’s great and I hope it keeps going.
KEV
Artefact added : 10th July 2020
by Mike Noon