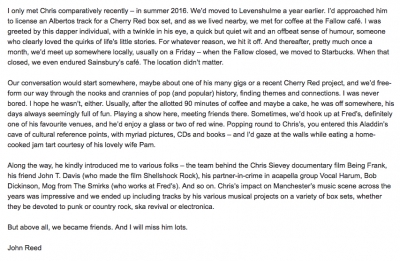 I only met Chris comparatively recently – in summer 2016. We’d moved to Levenshulme a year earlier. I’d approached him to license an Albertos track for a Cherry Red box set, and, as we lived nearby, we met for coffee at the Fallow Café. I was greeted by this dapper individual, with a twinkle in his eye, a quick but quiet wit and an offbeat sense of humour - someone who clearly loved the quirks of life’s little stories. For whatever reason, we hit it off. And thereafter, pretty much once a month, we’d meet up somewhere locally, usually on a Friday – when the Fallow closed, we moved to Starbucks. When that closed, we even endured Sainsbury’s café. The location didn’t matter.

Our conversation would start somewhere, maybe about one of his many gigs or a recent Cherry Red project, and we’d free-form our way through the nooks and crannies of pop (and popular) history, finding themes and connections. I was never bored. I hope he wasn’t, either. Usually, after the allotted 90 minutes of coffee and maybe a cake, he was off somewhere, his days always seemingly full of fun. Playing a show here, meeting friends there. Sometimes, we’d hook up at Fred’s, definitely one of his favourite venues, and he’d enjoy a glass or two of red wine. Popping round to Chris’s, you entered this Aladdin’s cave of cultural reference points, with myriad pictures, CDs and books – and I’d gaze at the walls while eating a home-cooked jam tart courtesy of his lovely wife Pam.

Along the way, he kindly introduced me to various folks – the team behind the Chris Sievey documentary film Being Frank, his friend John T. Davis (who made the film Shellshock Rock), his partner-in-crime in acapella group Vocal Harum, Bob Dickinson, Mog from The Smirks (who works at Fred’s). And so on. Chris’s impact on Manchester’s music scene across the years was impressive and we ended up including tracks by his various musical projects on a variety of box sets, whether they be devoted to punk or country rock, ska revival or electronica.

But above all, we became friends. And I will miss him lots.