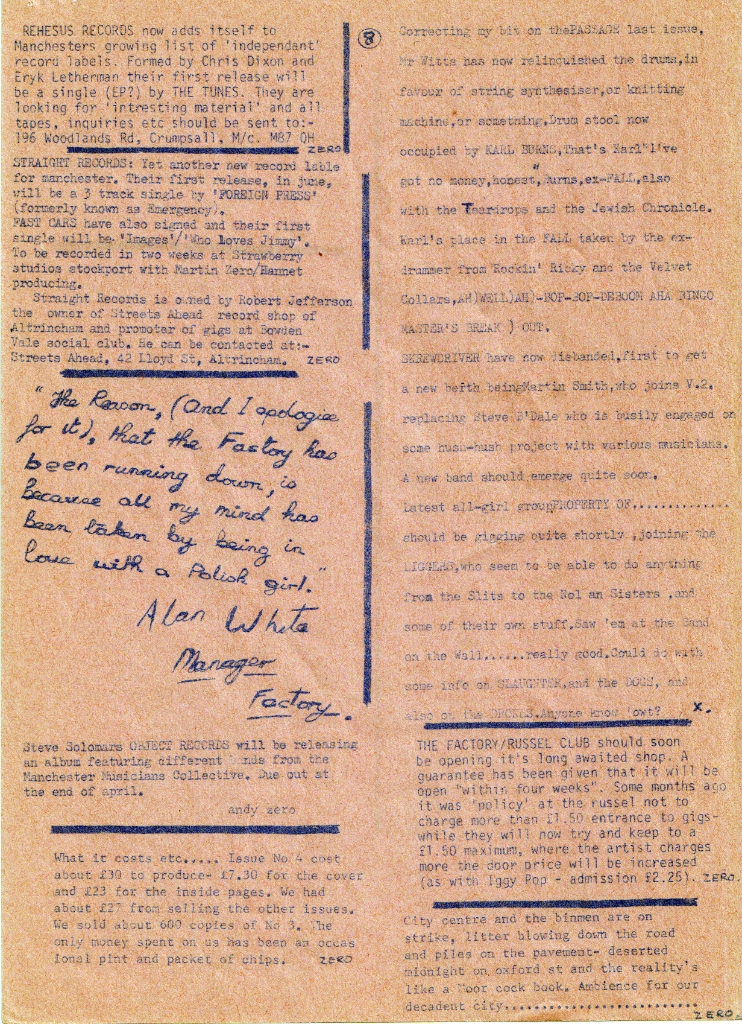 Featuring: Frantic Elevators, Manicured Noise, Jon the Postman, The Things, The Smirks, The Distractions.
Contributors: Andy Zero, Martin X, Godzilla, Kev.
Offices: Russell Club, Royce Road, Hulme, Manchester
TRANSCRIPTION:
REHESUS RECORDS now adds itself to Manchesters growing list of 'independant' record labels. Formed by Chris Dixon and Eryk Letherman their first release will be a single (EP?) by THE TUNES. They are looking for 'intresting material' and all tapes, inquiries etc should be sent to:- 196 Woodlands Rd, Crumpsall, M/c. M87 0H
ZERO
STRAIGHT RECORDS: Yet another new record lable for manchester. Their first release, in june, will be a 3 track single by 'FOREIGN PRESS' (formerly known as Emergency).
FAST CARS have also signed and their first single will be 'Images'/'Who Loves Jimmy'. To be recorded in two weeks at Strawberry studios stockport with Martin Zero/Hannet producing.
Straight Records is owned by Robert Jefferson the owner of Streets Ahead record shop of Altrincham and promoter of gigs at Bowden Vale social club. He can be contacted at:- Streets Ahead, 42 Lloyd St, Altrincham.
ZERO
"The reason, (and I apologise for it), that the Factory has been running down, is because all my mind has been taken by being in love with a Polish girl."
Alan White, Manager, Factory.
Steve Solomars OBJECT RECORDS will be releasing an album featuring different bands from the Manchester Musicians Collective. Due out at the end of april.
andy zero
What it costs etc..... Issue No 4 cost about £30 to produce- £7.30 for the cover and £23 for the inside pages. We had about £27 from selling the other issues. We sold about 600 copies of No 3. The only money spent on us has been an occasional pint and packet of chips.
ZERO
Correcting my bit on thePASSAGE last issue, Mr Witts has now relinquished the drums,in favour of string synthesiser,or knitting machine, or something. Drum stool now occupide by KARL BURNS,That's Karl"I've got no money,honest",Burns,ex-FALL,also with the Teardrops and the Jewish Chronicle. Karl's place in the FALL taken by ex-drummer from Rockin' Ricky and the Velvet Collars,AH)WELL)AH)-BOP-BOP-DEBOOM AHA BINGO MASTER'S BREAK ) OUT.
SKREWDRIVER have now disbanded,first to get a new berth beingMartin Smith,who joins V.2. replacing Steve B'dale who is busily engaged on some hush-hush proejct with various musicians. A new band should emerge quite soon.
Latest all-girl groupPROPERTY OF........ should be gigging quite shortly, joining the LIGGERS,who seem to be able to do anything from the Slits to the Nol an Sisters ,and some info on SLAUGHTER ,and the DOGS, and also on the DRONES.Anyone know 'owt?
X.
THE FACTORY/RUSSEL CLUB should soon be opening its long awaited shop. A guarantee has been given that it will be open "within four weeks". Some months ago it was 'policy' at the russel not to charge more than £1.50 entrance to gigs- while they will now try to keep to a £1.50 maximum, where the artists charges more the door price will be increased (as with Iggy Pop - admission £2.25).
ZERO.
City centre and the binmen are on strike, litter blowing down the road and piles on the pavement- deserted midnight on oxford st and the reality's like a Moor cock boo. Ambience for our decadent city...........
ZERO.
Artefact added : 16th August 2020
by Mike Noon