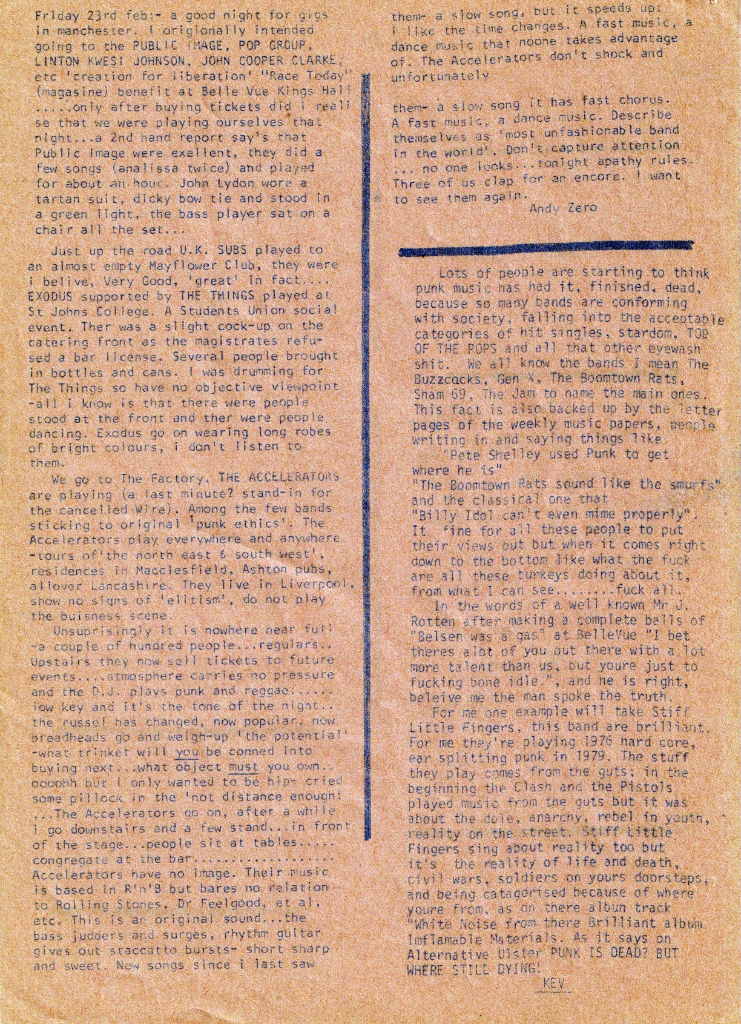 Featuring: Frantic Elevators, Manicured Noise, Jon the Postman, The Things, The Smirks, The Distractions.
Contributors: Andy Zero, Martin X, Godzilla, Kev.
Offices: Russell Club, Royce Road, Hulme, Manchester
TRANSCRIPTION:
Friday 23rd feb:- a good night for gigs in manchester. I originally intended going to the PUBLIC IMAGE, POP GROUP, LINTON KWESI JOHNSON, JOHN COOPER CLARKE, etc ‘creation for liberation’, “Race Today” (magazine) benefit at Belle Vue Kings Hall….only after buying tickets did i realise that we were ourselves playing that night…a 2nd hand report say’s that Public Image were exellent, they did a few songs (alalissa twice) and played for about an hour. John Lydon wore a tartan suit, dicky bow tie and stood in a green light, the bass player sat on a chair all the set…
Just up the road U.K. SUBS played to an almost empty Mayflower Club, they were I believe, Very Good, ‘great’ in fact…. EXODUS supported by THE THINGS played at St Johns College. A Students Union social event. There was a slight cock-up on the catering front as the magistrates refu-sed a bar can license. Several people brought in bottles and cans. I was drumming for The Things so have no objective viewpoint –all i know is that there were people dancing. Exodus go on wearing long robes of bright colours, i don’t listen to them.
We got to The Factory. THE ACCELERATORS are playing (a last minute? stand-in for the cancelled Wire). Among the few bands sticking to original ‘punk ethics’. The Accelerators play everywhere and anywhere –tours of ‘the north east & south west’ residences in Macclesfield, Ashton pubs, allover Lancashire. They live in Liverpool, show no signs of ‘elitism’, do not play the business scene.
Unsurprisingly it is nowhere near full –a couple of hundred people…regulars… Upstairs they now sell tickets to future events… atmosphere carries on pressure and the D.J. plays punk and reggae.. low key and it’s the tone of the night… the russel has changed, now popular, now breadheads go and weigh-up ‘the potential’ – what trinket will you be conned into buying next …what object must you own. Ooooh but I only wanted to be hip cried some pillock in the ‘not distance enough’… The Accelerators go on, after a while I go downstairs and a few stand…. in front of the stage… people sit at tables….congregate at the bar…….. Accelerators have no image. Their music is based in R’n’B but bares no relation to Rolling Stone, Dr. Feelgood, et al, etc. This is an original sound…the bass judders and surges, rhythm guitar gives out staccatto bursts- short sharp and sweet. New songs since i last saw them- a slow song, but it speeds up; i like the time changes. A fast music, a dance music that noone takes advantage of. The Accelerators don’t shock and unfortunately
them- a slow song it has fast chourus. A fast music, a dance music. Describe themselves as ‘the most unfashionable band in the world’. Don’t capture attention… no one looks… tonight apathy rules. Three of us clap for an encore. I was to see them again.
Andy Zero
Lots of people are starting to thing punk music has had it, finished, dead, because so many bands are conforming with society, falling into the acceptable categories of hit singles, stardom, TOP OF THE POPS and all that other eyewash shit. We all know the bands I mean The Buzzcocks, Gen X, The Boomtown Rats, Sham 69, The Jam to name the main ones. This fact is also backed up by the letter pages of the weekly music papers, people writing in and saying things like
“Pete Shelley used punk to get where he is”
“The Boomtown Rats sound like the smurfs” and the classical one that “Billy Idol can’t even mime properly”. It fine for all these people to put their views out but when it comes right down to the bottom like what the fuck are all these turkeys doing about it, from what I can see………..fuck all.
In the words of a well known Mr J. Rotten after making a complete balls of “Belsen was a gas” at BelleVue “I bet theres a lot of you out there with a lot more talent than us, but youre just to fucking bone idle.”, and he is right, beleive me the man spoke the truth.
For me one example will take Stiff Little Fingers, this band are brilliant. For me they’re playing 1976 hard core, ear splitting punk in 1979. The stuff they play comes from the guts: in the beginning the Clash and the Pistols played music from the guts but it was about the dole, anarchy, rebel in youth, reality on the street. Stiff Little Fingers sing about reality too but it’s the reality of life and death, civil wars, soldiers on your doorsteps, and being catagorised because of where youre from, as on there album track “White Noise from there brilliant album Imflamable Materials. As it says on Alternative Ulster PUNK IS DEAD? BUT WHERE STILL DYING!
KEV
Artefact added : 16th August 2020
by Mike Noon