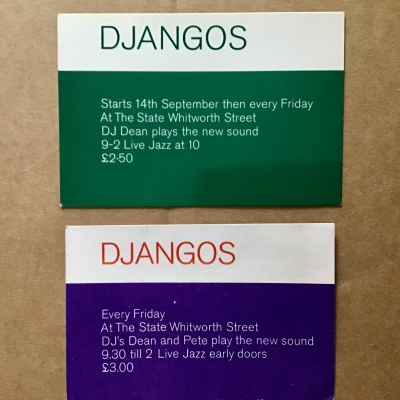 DJANGOS : The best rare funk and jazz night - Think it ran from end 90-92 when they then started doing FUSE at Hacienda

It was Rare “Funk 45s“ before they were a thing - it was “Blue Note Breaks“ before it was termed - it was classic jazz funk mixed with the private press LPs and obscure Brazilian stuff.

The live jazz - early doors- was a little jam session featuring the guys from ACR and Kalima, and sometimes the likes of Jon Da Silva woukd do a little “ dancehall” set to a handful of people before it got busy.
Artefact added : 19th September 2020
by Si Cheeba