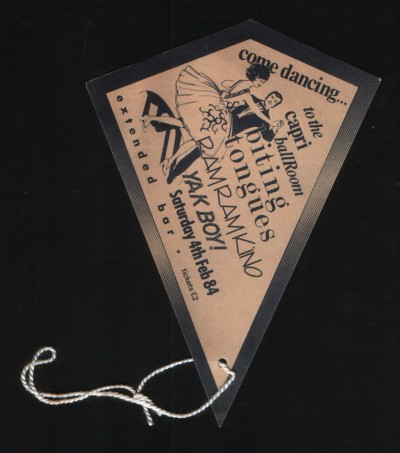 The Capri Ball room was an old dance studio /function room on Platt Lane opposite Platt Fields,
Ram Ram Kino was a short lived second version of Crispy Ambulance- with Steve OJ on bass (later of The Dust Junkys),
extra guitar from Kirk Podmore,Mark Norton on Percusion.
They had one release on Industrial Records (Throbbing Gristle's label) They also had some fetching self designed camoflage fabric,which was fasioned into home made uniforms,
Biting Tongues were a four piece at this point of Phil Kirby(drums) Howard Walmsley(sax ) Graham Massey (guitar ,wind, vocals)
Colin Seddon (bass & 2nd drums).
Yak Boy was Jonhn Hurst (the then Biting Sound engineer) doing a solo synth act with Roland 808 ,303 &101 synths ,that predated its popular usage as acid house kit.I think he also did some stuff on Morgan Khans Street Sounds UK Electro album .. .also worked for
Section 25 and Martin Hannet.
Artefact added : 5th June 2007
by graham

roryz Says –
I went to this gig with my sister, she was married to Kirk at that time. This was a good gig.

Was there an entrance with a big drum of some sort like a march in to the stage?