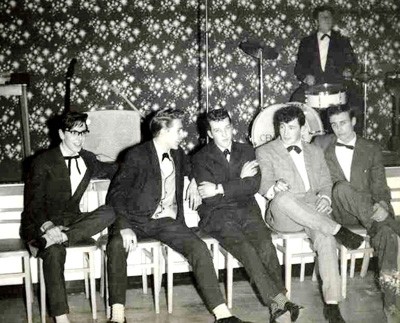 Photograph of The Centurions. The date is a guess.

Photo dated middle of 1962, Left to right they are:

The photo shows the band in a gig at Romiley Liberal club in the early days. It shows, from left to right, Jeff, Gren, Steve, Bernard and Dennis(I think) The drummer was Keith.
Jeff & Steve met at school and formed the band. Steve did all the leg work as he knew the other lads.
Jeff on bass, Gren Lead guitarist, Steve rhythm, Bernie singer. Dennis was the guy who managed to get the gigs.
We did have a girl singer in the band for a while up to the band finishing, she had a good voice.

Sad to say I believe there’s only Jeff and Steve still with us.
If you'd like to leave a comment, please Login. Login
Manchester Digital Music Archive is licensed under an
Attribution-NonCommercial-ShareAlike 4.0 International License.
Charity no. 1164179
Our archive currently contains 3660 Bands, 724 DJs, 1346 Venues, 234 Industry Professionals and 22139 artefacts contributed by 3611 members.