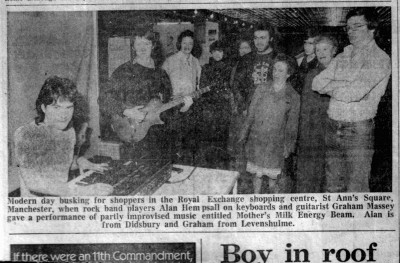 "I was a teenage Fripp and Eno"
Promoting their cassette album "The Loss Of Life With Dignity"on Lucious Orb Cassettes
Beach Surgeon (Graham Massey) and synthesist Alan Hempsall (of Crispy Ambulance)
set about droning their way through a whole Saturday at the the newly opened Royal Exchange Shopping Arcade.
The ManchesterEvening News were dispatched to cover it but had to rope in some passers by to make it look attended.
Some weeks later the Duo also performed at the opening of "That Cafe" on Stockport Rd, Levenshulme,where manchester s first mushroom lasagne was launched , fine dining and ambient music!
Artefact added : 5th June 2007
by graham