A Certain Ratio, Mudhutters
Other
1981 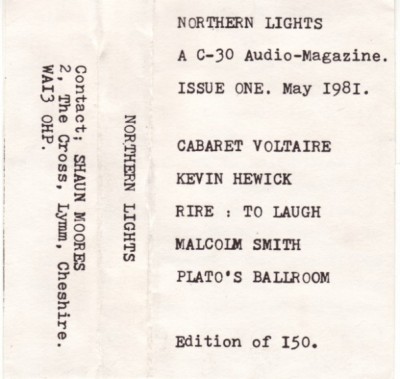 This is the first issue of Northern Lights, an audio cassette magazine by Shaun Moores. Focused on the twin cultural centres of Manchester and Liverpool, this c30 cassette tape was released in a limited edition of 150 copies.
Of interest from a Manchester perspective here is Malc Smith of Mudhutters fame (it says here) playing blue grass mandolin. Also 2 tracks by a band called "Rire: To Laugh" called 'Let The Children Play' and 'Silent Water' produced by Simon Topping of A Certain Ratio, and very much in the ACR vein of the day.
Artefact added : 24th June 2007
by shivadescending