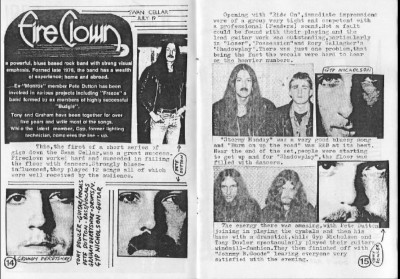 Write up for Fireclown at the Swan Cellar Bolton,19th July 1981, in the Bolton fanzine "Town Hall Steps"

This,the first of a short series of gigs down the Swan Cellar,was a great success.Fireclown worked hard and succeeded in filling the floor with dancers.Strongly blues-influenced they played 12 songs all of which were well received by the audience.
Opening with "Ride On",immediate impressions were of a group very tight and competent with a professional (Fender) sound.Not a fault could be found with their playing and the lead guitar work was outstanding,particularly in "Loser","Possession"and Rory Gallagher's "Shadowplay".There was just one problem, that being the fact that the vocals were hard to hear on the heavier numbers.
"Stormy Monday" was a very good bluesy song and "Burn on up the road" was R&B at it's best.Near the end of the set,people were starting to get up for "Shadowplay",the floor was full of dancers.
The energy there was amazing,with Pete Dutton joining in playing the cymbals then his bass with a drumstick while Gyp Nicholson and Tony Dowler spectacularly played their guitars windmill fashion.They then finished off with "Johnny B. Goode", leaving everyone satisfied with the evening.
Artefact added : 29th June 2007
by Arnie

mat Says –
hi arnie- if you send us the full size scan we'll add the text...

Arnie Says –
Saved you the job Mat,I've typed it out.

philplatt Says –
Fireclown were later joined by Steve Tansley (Drums) and and Loz Green Bass, They both then went on to play in The Frantic Elevators and then The Ride, Nobody seems to know where Loz is now but Steve Tansley is now drumming in The Bill Bailey Band with Tony and Dave Smiley (Bass) Dave also plays with Toss The Feathers and was an X Rider, (As far as I know).

philplatt Says –
Hi Arnie, Ow do to you too!, wow I aint seen Loz for years, next time you see can you him ask him to get in touch, it would be good to know whatt he's up to, Cheers Arnie, Phil P

philplatt Says –
Hey, Thanks to MDMA and Arnie Loz has since contacted me and will be now playing on a couple of tracks on my new album, this will be the first time I have seen LOz since 1991!! how good is that, thanks to you all!!! follow where we are at with this at www.darksideofthe..., Phil

circle alcove Says –
I saw them a couple of times. like a sort of hard bluesey
motorhead zztop thing. Gyp nicholsan, a serious Who freak, was one of the guitarists.
c.a.