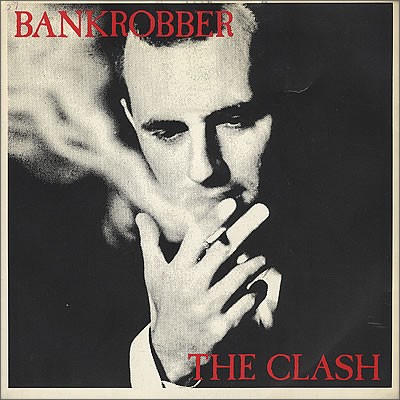 The classic single "Bankrobber" by The Clash was recorded in Manchester - on 1.2.80 at Pluto Studios on Granby Row - off Princess St near the Cyprus and the Factory building.

The attached is from an Observer feature on Oct 06 in which various current rock stars were asked to choose their favourite Clash track and say what the band meant to them. It seems a young Ian Brown stumbled across the recording session, recalling as follows:

I was at the recording of 'Bankrobber'. Me and my mate Pete Garner were walking down Granby Row in the middle of Manchester one day and we could hear these drums coming through the walls. Pete was a proper Clash fan and he was convinced it was them. Then Topper Headon walks out on to the street right in front of us!

He invited us downstairs into the studio to see what was going on. Mikey Dread was there and we got chatting. They were dead cool. Joe Strummer was sitting in the corner with a big, wide-brimmed hat on beneath this big grandfather clock, clicking his fingers in time to it. Paul Simonon asked us what our favourite film was and then said [affects authentic west London drawl]: 'Mine's Death Race 2000!' Funny, the things you remember. Afterwards, we showed Johnny Green, their tour manager, the way to the record shop and he bought two copies of 'London Calling' - one for each of us. I'll never forget it.

Pluto studios was set up by Keith Hopwood, fresh from selling 80 million records (80 million!) with Herman's Hermits. The studios are still there and specialise in music for children's TV.
Artefact added : 12th July 2007
by Tony/Longfella

I was aware of the Clash when punk happened because that was what started us going, although I don't think Joy Division were punk like that. I think we were something else that came after, that didn't have a name.

I heard 'Rock the Casbah' in New York when we first started going there in the early Eighties after the demise of Joy Division. We were struggling a bit because Ian Curtis's death meant we couldn't go in that direction any more; we'd peaked in that sound. Clubs in New York were 'new wave', and the music was infinitely better than in England. There was the Peppermint Lounge, Danceteria, Hurrah's, AM-PM. They weren't playing commercial dance music but club tracks by English groups. The two absolute classics were 'Tainted Love' by Soft Cell and 'Rock the Casbah'.

'Rock the Casbah' broke form. It really cut it in a club and showed me you can make club music that's not cheesy. Here was a proper group, making proper music, but they were using traditional rock'n'roll instruments to make music that dominated a New York club scene. That was a massive inspiration for me.

The full article - "Why the Clash are still rock titans" is at observer.guardian...
If you'd like to leave a comment, please Login. Login
Manchester Digital Music Archive is licensed under an
Attribution-NonCommercial-ShareAlike 4.0 International License.
Charity no. 1164179
Our archive currently contains 3596 Bands, 692 DJs, 1315 Venues, 191 Industry Professionals and 19364 artefacts contributed by 3514 members.