The High, Dave Booth, The Sandmen, Plenty
Flyer
The Hacienda
1990 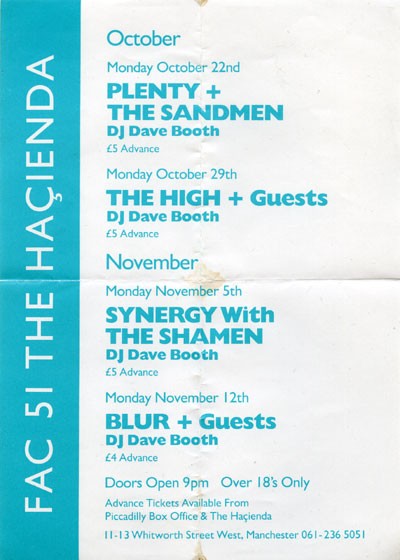 A flyer promoting gigs during October/November at The Hacienda.

Featuring appearances by The High, Blur and The Shamen on their Synergy tour. Also there's a gig from The Sandmen and Plenty both of whom I am guessing were local, so I added them to the database. If you know otherwise then post below and I'll correct it.
Artefact added : 18th July 2007
by jsz

elano Says –
Plenty were a group of hairdressers from chealde hulme. They weren't very good!

elano Says –
Ha! No, at playing music- they were dreadful. I think that's why they stuck to their day jobs!

sublimator Says –
I was at the October 22nd gig palying bass for the sandmen. I don't remember much about it as usual except that Martin our drummer was thought that Plenty's drummer was cheating 'cause he used a click track. Their Dad was friendly though.

matski Says –
Hey Sublimator, are you still in touch with any of the Sandmen? I'm an old school friend of Richard the guitarist and have been trying to track him down for ages... Got any leads...???

sublimator Says –
I have seen or heard from Festa for years. The last rumour was hat he was manging a bar on the Oxford Road somewhere behnind the old Riley Snooker Hall for our mate Simon who is an architect that we all shared digs with. That must have been more than ten years ago. I left The Sandmen in 1991, they split up about two or three years later. The high water mark was arguably a session for the John Peel Show with the new drummer and the new bass player. 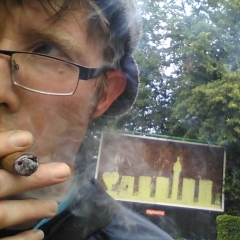 holmesofmetal Says –
Is this the same Sandmen who appeared on The Other Side of Midnight? Loved that song. Simple guitar, up...then down... then up...then down with a little bit of twinkling between the chord slides, great clear guitar sound. My tape ran out just as they stepped it up a notch so i don't know how that song ended. Even though i have not watched it this century i remember it clearly... over to YouTube next i think!

sublimator Says –
Yes indeed! it was the very same sandmen who appeared on after midnight, in the rehrsal at Granda we had the horrible experience if seeing Anthony H Wilson with no shirt on! but we met Gail Tansly from Coro on the canteen, some of the lads were impressed with that. I'm not sure if the TV clip has been uploaded to youtube, I don't have it, but It would make me grin to see it again - happy daze. I think I might have a go at rerecording some of those old songs and post the results on my myspace page www.myspcae.com/s...

Simon Van Phinn Says –
I know these posts were a while ago but i thought id set the recored straight about Plenty, i was the lead singer and think i know who wrote the first post very sad man you are.

Plenty were managed by Phil Saxe who was head of A&R for Factory, he also managed the Mondays originally, as regards to a click being used we didn't, just had a great back line. Anyway heres some more info.


Plenty. Four boys from the South Manchester suburbs, managed by Phil Saxe, Factory Records Head of A & R and ex Happy Mondays manager. Their star shone briefly but brightly on the cusp of the Madchester music scene of the late eighties , early nineties. Despite other promises and offers of recording deals, Plenty pinned their hopes to the Factory Records mast aspiring to become part of the labels legacy. Sadly it was not to be, the usual band infighting, musical disagreements and the original Factory Records collapse conspired against the band, resulting in the frustrated quartet's sad demise
>
> It had started so well. From numerous incarnations the band evolved into Plenty. Featuring Phinny (guitar/vocals), Andrew "Duke" Walker (Keyboards/vocals), Andy "Whit" Whittaker (Bass) and Rick Payne (Drums). One fine day, Duke (a hairdresser) had a customer come into his shop for a haircut. That man was Phil Saxe. Thus after watching Plenty rehearse he became the band's manager. The band went in the studio and recorded tracks. They quickly received airplay on local radio, Picadilly Key 103 and KFM. Under Phil's guidance the band went from strength to strength. Their meoldic brand of indie pop, classic 3 minute tales of lost love and teenage dreams being a winning formula, gaining a large loyal following and receiving plaudits from Ian Broudie and Gary Crowley amongst others. Plenty toured nationally and shared stages with Bridewell Taxis, Northside, The Wendys, culminating in a headline gig at the legendary Hacienda. History shows that Plenty were the only unsigned band to headline the Hac, ever, a feat they are still proud to hold to this day. The band's impressive early achievments mean that Plenty should not be allowed to be forgotten.
>So if you yearn for classic melodic guitar pop, desperate for powerful drum charged synths and appreciate teenage lyrical tales of lost love then you need Plenty

Richard Payne Says –
Well, kind of a contradiction in that you can't say that a certain band was not very good, (incidentally, I am not nor have I ever been a hairdresser) but then accuse them of using a click track which would actually suggest that you did think they were good really. Yes my dad is very friendly. I am said drummer, and will be playing at the reunion gig in October 2016. Just to clarify, in order to use a click track you would probably need head phones, which as seen on all our you tube videos I am clearly not wearing, we were just bloody good as a back line. (Actually, We were referred to as the best back line in Manchester at that time in several quarters) In fact, I would merely suggest that Martin just get some more drum lessons, probably easier...
If you'd like to leave a comment, please Login. Login
Manchester Digital Music Archive is licensed under an
Attribution-NonCommercial-ShareAlike 4.0 International License.
Charity no. 1164179
Our archive currently contains 3820 Bands, 747 DJs, 1444 Venues, 302 Industry Professionals and 29133 artefacts contributed by 3959 members.