The Jazz Band
Other
Davyhulme Park
1992 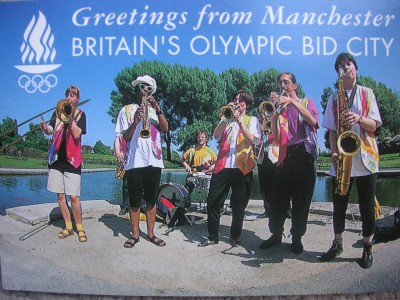 Postcard promoting Manchester's early nineties bid to host the 2000 Olympic games. Although we lost out to Sydney, the bid did pave the way for the 2002 Commonwealth Games- thereby securing Norris from Corrie a place in the mosaic outsde Afflecks in his Official Volunteer tracksuit.

Band and venue added - as listed on the reverse.
Artefact added : 18th July 2007
by Tony/Longfella