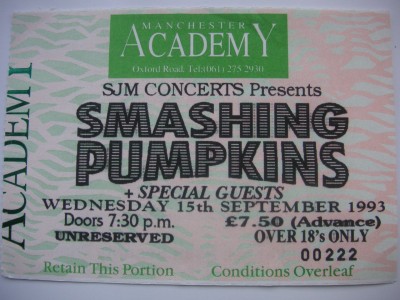 The Verve (or was it still just Verve in those days?) were the support act at this gig. Either way, Richard Ashcroft was still known as Mad Richard in the music press.

I remember them being very loud with Ashcroft throwing messiah poses with a white backlight, strobes and dry ice.
Artefact added : 18th July 2007
by Tony/Longfella

Abigail Says –
I went to this gig, and on the way out passed a mad Verve fan shouting to Richard Ashcroft through an open dressing room window. The fan was saying, 'fuckin 'ell, man, why are you doing support slots? You're the fuckin' greatest! You're amazing, you should be playing fuckin' stadiums!', etc. Ashcoft was shouting back in agreement. Both bands were great, as I recall, especially the Pumpkins whose drummer rocked like fuck. This was the height of their Siamese Dream success. I loved Verve too at that point as I was still too young to find Richard Ashcroft embarrassing.
If you'd like to leave a comment, please Login. Login
Manchester Digital Music Archive is licensed under an
Attribution-NonCommercial-ShareAlike 4.0 International License.
Charity no. 1164179
Our archive currently contains 3816 Bands, 743 DJs, 1437 Venues, 298 Industry Professionals and 28661 artefacts contributed by 3925 members.