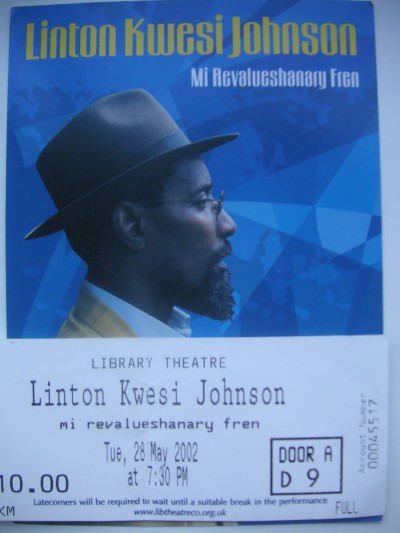 I thought I'd post this up as there's been a couple of mentions on the site lately of Linton Kwesi Johnson and his collaborator Dennis "Blackbeard" Bovell who produced the X-O-Dus single for Factory - see listed review. This is a flyer and a ticket for an LKJ poetry only (non music) event at the Library Theatre in 2002.

I first heard LKJs classic poem "Sonny's Lettah" literally under my bed clothes in about 78/79 on the John Peel show on a tiny transistor radio bought with Green Shield Stamps. It remains a stunning piece of work and was performed as part of the 36Hours JCC play at Studio Salford/King's Arms - see listed artefact.

This gig was also the first time I saw Manchester's excellent and sadly missed poet Dike Omeje, someone who I was proud to become friendly with over the next few years until he died tragically young in 2006. RIP Dike.