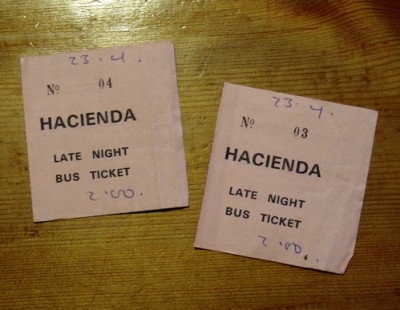 Hi - I've been meaning to add stuff to this fantastic site for ages but it's just been about finding the time. I'll start with some tickets I sold on ebay a year or so ago but I still have the jpegs to archive if not the actual items...

This service was offered to all punters (on entry to the club, if I recall, first-come-first-served) for a private minibus that took you home at the allotted time - these particular ones were for 2am on 23 April, according to the biro scribblings, and I've guessed at 1987 as the approximate year but it could have been 1988 or 1989 (by 1990 I was working at the venue so I would have been walking home in daylight most probably). I think it cost 50p and it took you to your front door which, for me at the time, would have been either Fallowfield or Whalley Range. There was also a separate 'women only' bus service, commissioned for the safety of female clubbers and gig-goers, that went on for several years more than this one I think. What a great service that's practically unheard of today!!!

Abigail Says –
Welcome to the Archive! Great artefact and story.

mat Says –
were you a student then? the woman only bus was i think run by the Poly, i could be wrong. i remember having to wave goodbye to my then girlfreind as she got the free woman only bus home (as you say, right to the doorstep!) whilst I had to walk all the back to West Didsbury from town. cheers.

KH Says –
Mat, yes, I was a Poly student then (Didsbury Site) and, yes, there was a FREE 'women's minibus' service from the Mandela Building (All Saints Site, Oxford Road) in operation at the weekends. I remember that there had been quite a few attacks on female students walking back from town, in both Whitworth Park and the scrublands near the PSV, that had instigated it.

The Hacienda definitely had their own 'women only' service however but, thinking back, it could have been in operation a few years after these tickets date from, maybe on the Flesh nights?

I don't recall when the both-sexes service ended but it was a shame when it did as the Night Bus services back then were skeletal and getting back from clubs in the city centre was often a nightmare when you had no money left for a cab. Aross town bus services were also poor (as indeed they still are) and getting over to gigs at the Apollo and the two Internationals from Whalley Range was another pain...

kershyfish Says –
Hello, Love the story of the bus ticket! Currently doing my final year documentary based on women in the Hacienda. Given me an extra story to think about that I never would have before!
If you'd like to leave a comment, please Login. Login
Manchester Digital Music Archive is licensed under an
Attribution-NonCommercial-ShareAlike 4.0 International License.
Charity no. 1164179
Our archive currently contains 3796 Bands, 743 DJs, 1432 Venues, 294 Industry Professionals and 28234 artefacts contributed by 3896 members.