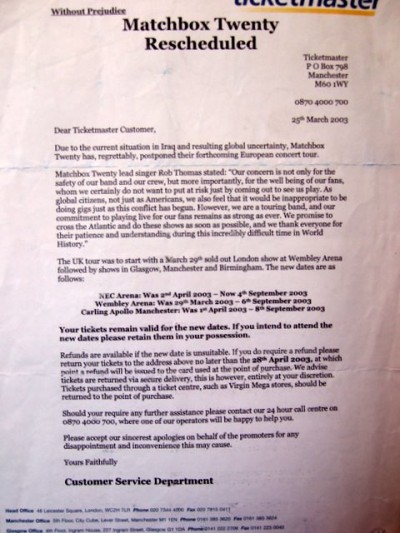 Had to put this on it relates to an American Band Matchbox Twenty who had I think had possibly released one single at this point in the UK.

I was bought the tickets as a gift and got this through the post. I thought it was hilarious then and still do now. It relates to the band cancelling their gig at the Manchester Apollo because of the Iraq War.

It is so silly and pompous I had to keep it. Never really thought of Mancunians as 'Global Citizens' but there you go.

'During this incredibly difficult time in World history' I am sure that the gigs in Manchester carried on regardless but not for Matchbox Twenty it seems
Artefact added : 24th July 2007
by JAX