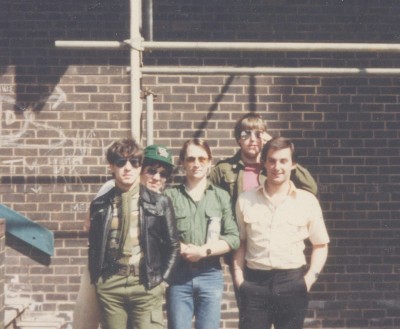 Hey, I used to be the bassist from Crafty Ave. Loved the Spread Eagle, you could do what ever you wanted there it was great. Dint the landord at one time have a huge bloody snake of some sort?
Still in touch with the old band, at the mo we are all doing our own projects, (all a bit fatter) and maybe one day we might ............ hmmmmm, maybe
Snake

t.strainer Says –
Is that you Malc,ain't seen you in years,I used to prop up the bar at the Pit and Nelson.I recognise you and Alex,is that Vince at the back?, who are the other two I've forgot their names?.

Snake Lieberman Says –
erm no its not malc, malc was tall with lots of hair, i do remember the pit n nelson tho, a proper pub, in the photo is Al (singer), Dave (drummer), me on bass, Stubsy (rodie) and Alex (guitarist)

t.strainer Says –
Is'nt this the band that evolved into Blackfire(or was it the other way about)?.

Arnie Says –
Nice to see another band linked to the Spread,keep those photos coming !!

captain1959 Says –
hi snake,i was the drummer before dave(broadbent) i didnt know malc was replaced on bass though.one song i remember was "little bleeder"..i remember it was one of al broadbent's fav songs.was arthur grimes still the manager when that pic was taken?
regards, dave layton

Snake Lieberman Says –
Dave hi, I do remember the band talkin about ya, ........a spider fighter saved my life last nite it must o been around seven am.......... i still have a copy of the studio tape on cassette on it also is Alice, space station, i think it was called and so on, Arthur was still manager then, but he sort of vanished when Malc did, I remember watchin em in some basement in an Ashton pub, you used to do 'Merrygoround' thought that one was great, anyway Dave Broadbent is still drummin with 'A Few Good Men' Al is doin recordin stuff at home, Alex just eats for England now its his new hobby, and I have a rock band 'Fifty Fingers' based in Delamere, I still see Al now and then, were all pushin on a bit but it great were all still at it.

darthmaluk Says –
Hi Captain1959, Saw jacko recently and got some old recordings from 1980 in the Spread Eagle and Commercial with you and dave Thompson in the band

captain1959 Says –
thanks alec,great recordings,i must admit i dont remember "full circle"....what a great song though! and at the commercial gig just before that song you can hear alan heckling someone in the bar who was walking out the door...very funny!

captain1959 Says –
just an update on current events: myself alec and vince are now in a covers band called "just for kicks" we did our first show at vince and colin the keyboard player's joint 50th birthday bash at aldwynians rugby club in audenshaw
If you'd like to leave a comment, please Login. Login
Manchester Digital Music Archive is licensed under an
Attribution-NonCommercial-ShareAlike 4.0 International License.
Charity no. 1164179
Our archive currently contains 3861 Bands, 758 DJs, 1458 Venues, 316 Industry Professionals and 29645 artefacts contributed by 4034 members.