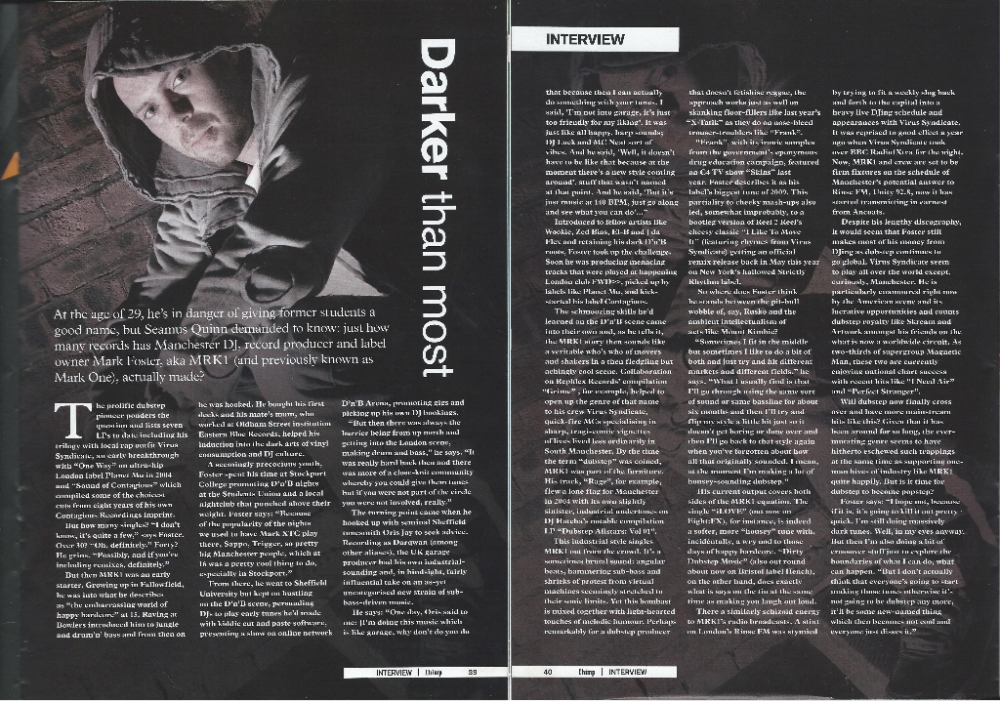 MRK 1 interview by Seamus Quinn. Published as “Darker Than Most” in Chimp magazine, January, 2011.

At the age of 29, just how many records has Manchester DJ, record producer and label owner Mark Foster, aka MRK1 (and previously known as Mark One), actually made?

The prolific dubstep pioneer ponders the question and lists seven LPs to date including his trilogy with local rap outfit Virus Syndicate, an early breakthrough with "One Way" on ultra-hip London label Planet Mu in 2004 and the current "Sound of Contagious" which compiles some of the choicest cuts from eight years of his own Contagious Recordings imprint.

But how many singles? "I don't know, it's quite a few," says Foster. Over thirty? "Oh, definitely." Forty? He grins. "Possibly, if you're including remixes, definitely".

But then MRK1 was an early starter. Growing up in Fallowfield, he was into what he describes as "the embarrassing world of happy hardcore" at 15. Raving at Bowlers introduced him to jungle and drum'n' bass and from then on he was hooked. He bought his first decks and his mate's mum, who worked at Oldham Street institution Eastern Bloc Records, helped his induction into the dark arts of vinyl consumption and DJ culture.

A seemingly precocious youth, Foster spent his time at Stockport College promoting D'n'B nights at the Students Union and a local nightclub that punched above their weight.

Foster says: "Because of the popularity of the nights we used to have Mark XTC play there, Sappo, Trigga, so pretty big Manchester people; which at 16 was a pretty cool thing to do, especially in Stockport."

From there, he went to Sheffield University but kept on hustling on the D'n'B scene, persuading DJs to play early tunes he'd made with kiddie cut and paste software, presenting a show on online network D'n'B Arena, promoting gigs and picking up his own DJ bookings.

"But then there was always the barrier being from up north and getting into the London scene, making drum and bass," he says. "It was really hard back then and there was more of a close-knit community whereby you could give them tunes but if you were not part of the circle you were not involved, really."

The turning point came when he hooked up with seminal Sheffield tunesmith Oris Jay to seek advice. Recording as Darqwan (among other aliases), the UK garage producer had his own industrial-sounding and, in hindsight, fairly influential take on an as-yet uncategorised new strain of sub-bass-driven music.

He says: "One day, Oris said to me: 'I’m doing this music which is like garage, why don’t do you do that because then I can actually do something with your tunes. I said, 'I’m not into garage, it’s just too friendly for my liking'. It was just like all happy, harp sounds; DJ Luck and MC Neat sort of vibes. And he said, 'Well, it doesn’t have to be like that because at the moment there’s a new style coming around', stuff that wasn’t named at that point. Oris said, 'But it’s just music at 140 BPM, just go along and see what you can do'."

Introduced to fellow artists like Wookie, Zed Bias, El-B and J da Flex and retaining his dark D'n'B roots, Foster took up the challenge. Soon he was producing menacing tracks that were played at happening London club FWD>>, picked up by labels like Planet Mu, and kick-started his label Contagious.

The schmoozing skills he'd learned on the D'n'B scene came into their own and, as he tells it, the MRK1 story then sounds like a veritable who's who of movers and shakers in a then fledgling but achingly cool scene. Collaboration on Rephlex Records' compilation "Grime" , for example, helped to open up the genre of that name to his crew Virus Syndicate, quick-fire MCs specialising in sharp, tragi-comic vignettes of lives lived less ordinarily in South Manchester.

By the time the term "dubstep" was coined, MRK1 was part of the furniture. His track, "Rage", for example, flew a lone flag for Manchester in 2004 with its own slightly sinister, industrial undertones on DJ Hatcha's notable compilation LP "Dubstep Allstars: Vol. 01".

This industrial style singles MRK1 out from the crowd. It's a sometimes brutal sound: angular beats, hammering sub-bass and shrieks of protest from virtual machines seemingly stretched to their sonic limits. Yet this bombast is mixed together with light-hearted touches of melodic humour. Perhaps remarkably for a dubstep producer that doesn't fetishise reggae, the approach works just as well on skanking floor-fillers like last year's "X-Tatik" as they do on nose-bleed trouser-troublers like "Frank".

"Frank", with its ironic samples from the government's eponymous drug education campaign, featured on C4 TV show Skins last year. Foster describes it as his label's biggest tune of 2009. This partiality to cheeky mash-ups also led, somewhat improbably, to a bootleg version of Reel 2 Reel's cheesy classic "I Like To Move It" (featuring rhymes from Virus Syndicate) getting an official remix release back in May this year on New York's hallowed Strictly Rhythm label .

So where does Foster think he stands between the pit-bull wobble of, say, Rusko and the ambient intellectualism of acts like Mount Kimbie?

"Sometimes I fit in the middle but sometimes I like to do a bit of both and just try and hit different markets and different fields," he says.

"What I usually find is that I’ll go through using the same sort of sound or same bassline for about six months and then I’ll try and flip my style a little bit just so it doesn’t get boring or done over and then I’ll go back to that style again when you’ve forgotten about how all that originally sounded. I mean, at the moment I’m making a lot of housey-sounding dubstep."

His current output covers both sides of the MRK1 equation. The single "iLOVE" (out now on Eight:FX), for instance, is indeed a softer, more "housey" tune with, incidentally, a wry nod to those days of happy hardcore. "Dirty Dubstep Music" (also out round about now on Bristol label Hench), on the other hand, does exactly what is says on the tin at the same time as making you laugh out loud.

There a similarly schizoid energy to MRK1's radio broadcasts. A stint on London's Rinse FM was stymied by trying to fit a weekly slog back and forth to the capital into a heavy live DJing schedule and appearances with Virus Syndicate. It was reprised to good effect a year ago when Virus Syndicate took over BBC Radio1Xtra for the night. Now, MRK1 and crew are set to be firm fixtures on the schedule of Manchester's potential answer to Rinse FM, Unity 92.8, when it starts transmitting in earnest from Ancoats next month.

Despite his lengthy discography, it would seem that Foster still makes most of his money from DJing as dubstep continues to go global. Virus Syndicate seem to play all over the world except, curiously, Manchester.

He is particularly enamoured right now by the American scene and its lucrative opportunities and counts dubstep royalty like Skream and Artwork amongst his friends on the what is now a worldwide circuit. As two-thirds of supergroup Magnetic Man, these two are currently enjoying national chart success with recent hits like "I Need Air" and "Perfect Stranger".

Will dubstep now finally cross over and have more mainstream hits like this? Given that it has been around for so long, the ever-mutating genre seems to have hitherto eschewed such trappings at the same time as supporting one-man hives of industry like MRK1 quite happily. But is it time for dubstep to become popstep?

Foster says: "I hope not, because if it is, it’s going to kill it out pretty quick. I’m still doing massively dark tunes. Well, in my eyes anyway. But then I’m also doing a bit of crossover stuff just to explore the boundaries of what I can do, what can happen. But I don’t actually think that everyone’s going to start making those tunes otherwise it’s not going to be dubstep any more, it’ll be some new-named thing which then becomes not cool and everyone just disses it."
Artefact added : 12th January 2021
by Seamus Quinn