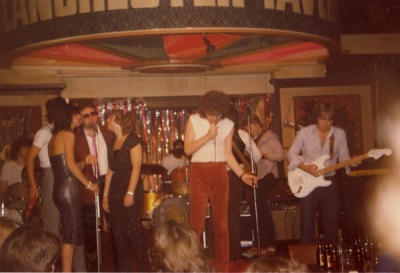 This was a charity show at The Yewtopia Lounge in The Yewtree Hotel, Wythenshawe, probably in the summer of 1979. We used to have a floating line-up for these things - this night we had two drummers.

I knew Toby from Ed Banger & The Nosebleeds. He went on to play in Ludus, Nico's backing band, and then Primal Scream. This show would have been right around the time that Donald Johnson joined A Certain Ratio. Barry Spencer had been the guitarist in The Freshies - he later worked as an actor at Altrincham Rep, I believe. Ian Shuffs was a great bass player - he'd played in various funk bands and did that funky slap thing with his thumb. Very impressive. Last I heard he'd emigrated to South Africa. Phil Woolley was a brilliant guitarist and singer and he played in various South Manchester bands over the years.

I remember this night because we'd had to load in and soundcheck before 7.00 - and we didn't go until after midnight. By which point, half the band was off their face. The place was packed to the doors and the first half of the set was hideous - we rescued it by bashing out lots of Johnny B Goode and Route 66 type stuff.
Artefact added : 7th August 2007
by Steve McGarry