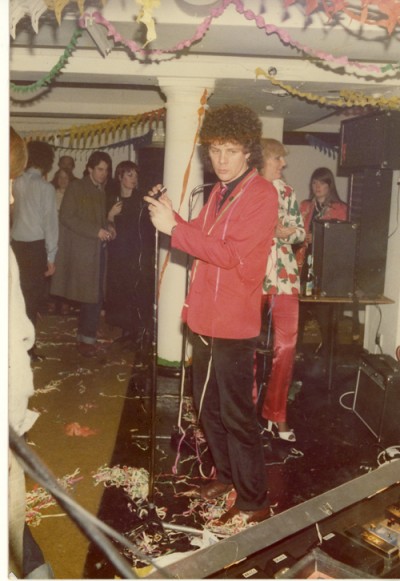 Steve McGarry's First Offence - A New Year's Eve party at an Italian restaurant on the corner of Mount Street and Central Street. I can't remember the name of the place, but it was downstairs.

That's me (Steve McGarry) in the foreground and Shann Lee Parker just behind me. (Shann was signed to RCA at one point, and I remember that she supported Sad Cafe at The Apollo around this time. She was married to drummer Clem Lee, who also owned Countdown Recording Studios.) She got up this night to sing a couple of numbers with the band.

The line-up that night was me, Spider Mike King on guitar (he had played with Slaughter & The Dogs in the very early days), Jenni McCartney on backing vocals (that's her peeking out from behind those speakers), Mike Marsden on keyboards, John Cunningham on bass and Toby Toman on drums.

Toby was playing with Ludus at that time, and that's Linder and Ian devine from Ludus in the greatcoats in the background.

I can't remember who threw the party, but the place was pretty full. I remember Les Thompson and some of his Didsbury cohorts were there. We did the show as a favour to a mate, in return for free food and booze - so everyone wass pretty hammered by the end. I know we had a 45-minute set and we had to play it twice because they didn't have a deejay.

Toby went on to play with Nico and Primal Scream, and is now off the radar down in Dorset. John Cunningham played bass with Nico for a while, but he died a few years ago.
Artefact added : 7th August 2007
by Steve McGarry