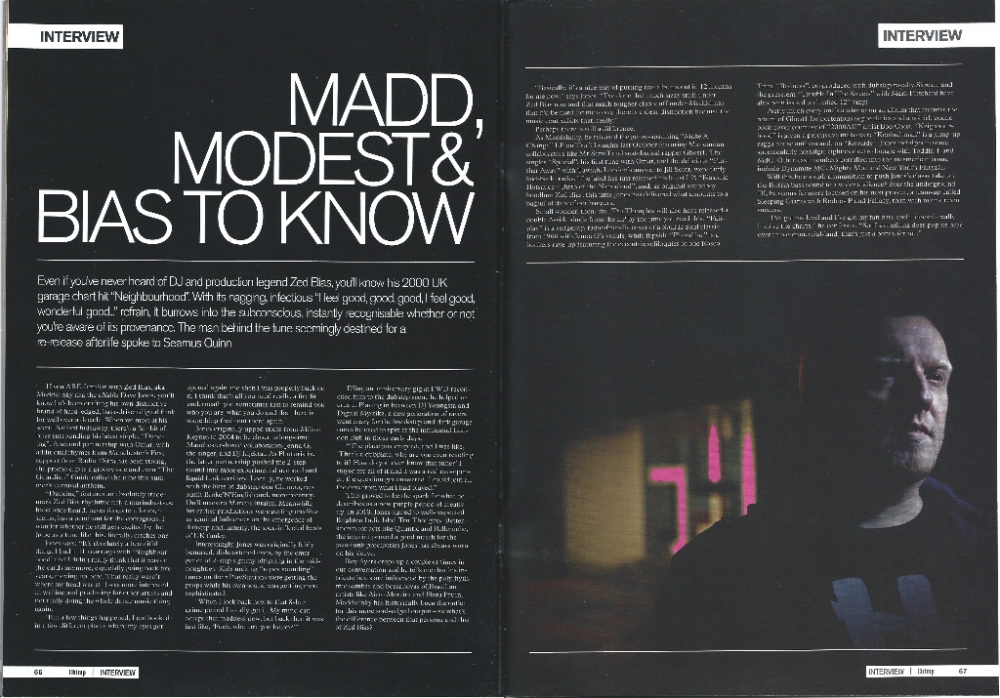 Even if you've never heard of DJ and production legend Zed Bias, you'll know his 2000 UK garage chart hit "Neighbourhood". With its naggingly infectious "I feel good, good, good, I feel good, wonderful good..." refrain, it's of those tunes that burrows into the subconscious, instantly recognisable even if you're not aware of its provenance and seemingly destined for an immortal re-release afterlife.

If you are familiar with Zed Bias, aka Maddslinky aka the affable Dave Jones, you'll know that he's been crafting his own distinctive brand of hard-edged, bass-driven digital funk for well over a decade. When I meet up with him at his secret Salford hideaway, there's a fair bit of buzz surrounding his latest single "Dancing". A second partnership with evergreen soul singer Omar (and with additional rhymes from Manchester's Fox), support from Radio 1Xtra has been strong, the promo vid's groovy and even The Guardian Guide is describing the tune as this summer's carnival anthem.

"Dancing" features an absolutely trademark Zed Bias rhythmic riff, a marimba-type hook that's once heard, never forgotten. Jones, it seems, has a serious penchant for the contagious. I wonder whether he still gets excited by the hype as a tune like this, literally, catches on.

Jones says: "It’s absolutely a beautiful thing. I had it 11 years ago with "Neighbourhood" and I didn’t really think that it was on the cards anymore, especially going back five years, moving up here. That really wasn’t where my head was at. I was more interested in writing and producing for other artists and not really doing the whole dance music thing again. But a few things happened, I got booked in a few different places where my eyes got opened again and then I was properly back on it. I think that’s all you need really, a fire lit underneath you sometimes just to remind you who you are, what you do and that there is something fresh out there again."

Jones originally upped sticks from Milton Keynes in 2004 to be closer to long-time Manchester-based collaborators Jenna G, the singer, and DJ Injekta. As Phuturistix, the latter partnership pushed the 2-step sound into more experimental neo soul and liquid funk territory. Locally, he worked with the likes of dubstep don Chimpo, rap outfit Broke N' English and, more recently, DnB maestro Marcus Intalex. Meanwhile, his earlier productions were getting credited as seminal influences on the emergence of dubstep and, latterly, the soca-inflected beats of UK funky.

Interestingly, Jones was originally fairly bemused, disheartened even, by the emergence of 2-step's grimy offspring in the mid-noughties. Kids making "ropey sounding" tunes on their PlayStations were getting the props while his own sound was getting more sophisticated.

"When I look back now to that 8-bar grime period I totally get it. My mind can accept that madness now, but back then it was just like, 'Fuck, what are you lot on?'"

DJing an anniversary gig at FWD>> reconciled him to the dubstep scene that he helped to create. Playing in between DJ Youngsta and Digital Mystikz, a new generation of ravers went crazy for the breakstep and dark garage tunes he used to spin at the influential London club in its early days.

"The place just erupted, and I was like, 'That’s a dubplate, why are you even reacting to it? How do you even know that tune?' I stayed for all of it and it was a real eye-opener; the question got answered. I could join all the dots from what I had played."

This proved to be the spark for what he describes as a new purple period of creativity. In 2010, Jones signed to well-respected Brighton indie label Tru Thoughts. Better known for acts like Quantic and Belleruche, the imprint proved a good match for the jazz-funk proclivities Jones has always worn on his sleeve.

Roy Ayers crops up a couple of times in our conversation and he tells me that his intricate beats are influenced by the polyrhythmic sambas and bossanovas of Brazilian artists like Airto Moreira and Flora Pruin. Maddslinky has historically been the outlet for this more soul-edged output so what's the difference between that persona and that of Zed Bias?

"Basically, it’s a nice way of putting two albums out in twelve months for me now," says Jones. "I’ve done that much jazzy stuff under Zed Bias now and that much tougher club stuff under Maddslinky that it’d be hard for me to say there is a clear distinction because the music contradicts that, really."

Perhaps there is still a difference. As Maddslinky, he released the genre-spanning "Make A Change" LP on Tru Thoughts last October featuring Mancunian collaborators like Mr Scruff and scatological rapper Ghost1. The singles "Special", his first tune with Omar, and the delicious "Further Away" with Tawiah, London's answer to Jill Scott, were fairly laid back tracks. Later this month, the label will release his latest LP, "Biasonic Hotsauce – Birth of the Nanocloud". As original soundboy hoodlum Zed Bias, this time Jones has delivered what amounts to a bagful of dancefloor bangers.

Small wonder, then, that Tru Thoughts will have already released a double A-side single from the LP by the time you read this. "Fairplay" is a zeitgeisty, radio-friendly cover of a Soul II Soul classic from 1988 featuring (of course) Jenna G on vocals, while flipside "Phoneline" is a bonkers rave up featuring the eccentric soliloquies of one Rosco Trim. "Badness", co-produced with dubstep royalty Skream and the prescient "Trouble In The Streets" with Mark Pritchard have also been issued on limited 12" vinyl.

Pretty much every one's a winner on an album that features the return of Ghost1 for portentous segue duties and noirish comic book cover art from 2000AD's Boo Cook. "Neighbourhood" is given a percussive makeover, "Koolnahman" is a jump up ragga house anthem and on "Koolade", Jones indulges in some spectacularly nostalgic 1980's electro boogie with Toddla T and MdC. Other cast members corralled into the mesmeric miasma include Dynamite MC, Mighty Moe and New York's FaltyDL.

Will this be enough ammunition to push Jones' classy take on the British bass sound to a wider audience? Ever the underground DJ, he seems far more focused on his next project, a team-up called Sleeping Giants with Rodney P and Fallacy, than with mainstream success.

"I’ve got my level and I’ve got my fan base and it doesn’t really involve the charts," he says. "So if something does pop its head over into commercial-land, that’s just a bonus for me."
Artefact added : 13th January 2021
by Seamus Quinn