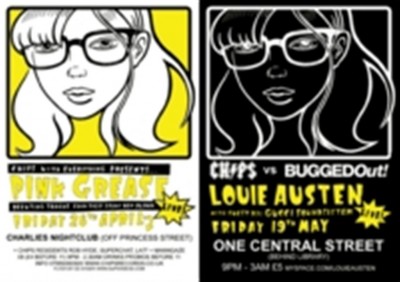 Chips with Everything. Double flyer for two amazing Chips events events. Firstly people queued around the block to get into ting Charlies for one of Pink Grease's legendary Chips with Everything shows. As usual with Chips, nothing went to plan and we opened the club around 45 minutes late. Pink Grease totally destroyed though and a kick ass party exploded all over the venue after the band had finished with Chips DJ's Manngaze, Rob Hyde, DJ Superchat and LA77.

The other side of the flyer was for one of the series of Bugged Out! vs Chips nights at One Central Street. This one featured awesome techno crooner Louie Austen who sent the ladies into a frenzy! Chips DJ's Manngaze, LA77, Rob Hyde and DJ Superchat played with special guest DJ's Gucci Soundsystem (who for this occasion was just Ben Rymer, formerly of old Chips friends Fat Truckers, playing on his own).
Artefact added : 7th August 2007
by Manngaze