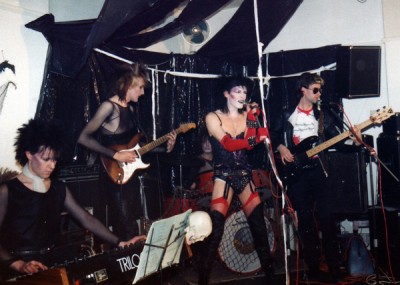 Stockport's one and only glam/goth rockers, Marquis de Sade, from 1985.

rokgod5656 Says –
I played guitar/keyboards in Marqius de Sade from 1981 - 84 and lost contact with them after this time. I discovered this website recently and was saddened to learn of the death of Dave Ellis. He was a bit of a rough diamond and a very talented song writer. I have never forgotton the times I spent with these talented and under-rated musicians.

mark leary Says –
Reply from Michael Pollard:
'With the help of Pete Litler (Paris and the Atmospheres) I've put together a CD of the few studio recordings of the band that remain to give to the ex-members of the band. I'd be happy to send you a copy as you may well feature on some of the tracks. We also have a dvd of the Boars Head gig and some earlier rehearsals. Also if you have any recordings of the band we'd be very interested. You can contact me via my website www.michaelpollar...
Cheers.'

Jenny B Says –
hahaha dave in his sussies, what a legend

zoe ellis Says –
dave ellis was my dad, and im so proud of him he was a legend! sadly missed by me and my bro n fam, i have a dvd of marquis de sade so if anyone wants a copy email me.

MichaelP Says –
Hello Zoe,
I'm interested to know what the DVD is of and whether you have any other live stuff. I've got copies of some studio material which I'd be very happy to pass on to you but I can't find an email address for you. If you could contact me on info@michaelpollard.co.uk that would be great. My wife, Kathryn, was with the band for a short while, playing keyboards. She introduced me to the band's music some years ago and I was instantly hooked. Hope to hear from you.

Raps Says –
This band is interesting! Is the drummer the same Les Brady who is now a football referee in Stockport??! Also, I shared a house in Heaton Moor in summer 1980 with guitarist Stu Grimshaw and a few others (including Joanne Whalley from Romiley (later Joanne Whalley-Kilmer), then a 'face' on the Stockport punk scene. Would love to know what became of Stu and his pal Peter Smallwood.

Abigail Says –
Can you upload the actual video via YouTube?

orangepeel Says –
Zoe I was good mates with your Dad in the late 70s and in 81/82 we lived in a mad share house in Bramhall with other bands , My name is Neil Parker I was the drumer in NU-TRICX. Sad to hear he is no longer with us . Them days were some of the best times of my life, Crazy mad nights at PIPS with Stu and Dave...Love to see the DVD . Raps Do I know you ? Our band practisis were at my Dads in heaton moor near the station . I was hanging with the same lads and good mates with Carol Morley, Pauls sister,I also had a thing with Joanne for a bit.

Lespaul67 Says –
I was in this band very briefly as a guitarist around 1984 and Dave lived in Cheadle heath as a caretaker to a funeral directors and we would rehearse there. I remember the real human skull he had called Prince William that Dave always told me he found in a bustop one night lol. He had it stolen from him by Bikers at a gig in Cheadle and was gutted. I still have a westone Thunder 1A that i let Dave use that has Buckle rash all over the back thanks to his studded belt lol.

eiwob66 Says –
I played bass for some considerable time for these guys, great fun indeed and i still have a fair amount of recordings from that time. Many happy memories and so saddened to hear of Dave's death. A true original 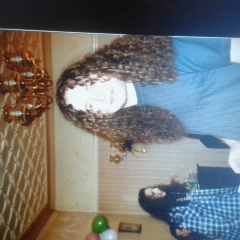 mophead Says –
Mophead speaking here.
As the songwriter for Push Push Stockport.
The Boarshead was a great venue to be at. Loved that place and listend to Dave and the band on many occasions. Frigging brilliant band with a bit of a twist.
Mophead.
Push Push.
Band members were.
Dean Redman vocals and acoustic guitar.
Steve McCabe bass player.
Mophead keyboards.
Jimmy and then Glenn and Les drums.
Tim at Courtyard recording studios in Stockport might have some recordings still ?.
If you'd like to leave a comment, please Login. Login
Manchester Digital Music Archive is licensed under an
Attribution-NonCommercial-ShareAlike 4.0 International License.
Charity no. 1164179
Our archive currently contains 3714 Bands, 737 DJs, 1367 Venues, 252 Industry Professionals and 26430 artefacts contributed by 3771 members.