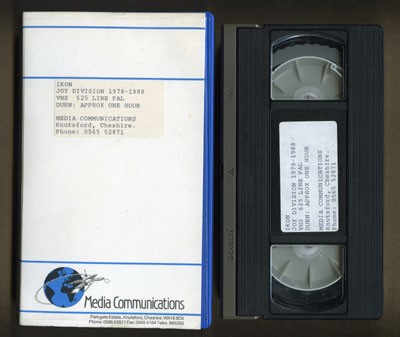 It was produced by the US label and apparently withdrawn before being widely distributed. This didn't stop it from being bootlegged, and one of these tapes was the source of many of the DVD bootlegs you now see on eBay.

It's interesting to note that the Granada and BBC material still looks like it was transferred from a copy of a VHS recording rather than a clear master tape even on this original promo.

Riot Nrrrd? Says –
I would give my left nutsack to own this :)

Who owns this artifact? Could they shed any light on why this was shelved (by QWEST or anyone else)? I can't understand for the life of me why this hasn't been released as a DVD (same for "Here Are The Young Men", for that matter) by now. My copy, despite being an old VHS videotape, looks like it's bloody 6th generation - absolute rubbish quality. I'd dearly love to see a 1st gen like this one ...

jsz Says –
Like I mentioned before the TV stuff isn't particularly good quality even on this original copy, if it were licensed from Granada/BBC for a DVD now it would be far better. Also, the interview on Something Else is really badly edited down and makes little sense on here.
If you'd like to leave a comment, please Login. Login
Manchester Digital Music Archive is licensed under an
Attribution-NonCommercial-ShareAlike 4.0 International License.
Charity no. 1164179
Our archive currently contains 3676 Bands, 737 DJs, 1354 Venues, 239 Industry Professionals and 22353 artefacts contributed by 3637 members.