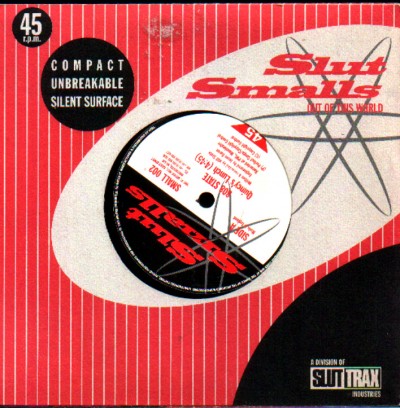 808 State exclusive 7 inch release on SLUT SMALLS.
SLUT SMALLS was a record club idea by Richard Hector Jones run out of the Jockey Slut Office in Sankey Soap. I think you had to subscribe to recieve one a month..and they were nt available in shops..? I could be wrong.
Other releases included Sirconical , Silicone Scally, Lionrock....
There was usualy one band on each side ,On the other side of 808States Quincys Lunch (recorded at PWL Studios) was JEGA - Move Ur Body..
Artefact added : 18th October 2007
by graham

Mike Noon Says –
Nice to see Dicky Sense made it onto the Manchester Music Archive. The Slut Smalls weren't all subscription-only, but being only 1000 copies for artists like Jon Spencer Blues Explosion, Dirtbombs, Barry Adamson and Stockhausen and Walkman they didn't last long on the shelves.
If you'd like to leave a comment, please Login. Login
Manchester Digital Music Archive is licensed under an
Attribution-NonCommercial-ShareAlike 4.0 International License.
Charity no. 1164179
Our archive currently contains 3734 Bands, 739 DJs, 1424 Venues, 260 Industry Professionals and 27789 artefacts contributed by 3846 members.