It was a Friday evening in summer 1988 and once again we found ourselves setting up at The Boardwalk. It was to be a better gig tonight - not having to sell a bunch of bloody tickets and end up handing over ALL the cash to the chief teller in the back room.

We were to support The Blue Ox Babes which had in its line up the keyboard player Andy Leek and guitarist Kevin ‘Al’ Archer from Dexy’s Midnight Runners – a proper gig this time we thought wishfully (see actual Boardwalk flyer below).

Staff at the Boardwalk scuttled to the stage and handed Al and his mates a massive tray of tea and biscuits. We were excited about what they would bring us. Alas it was two fingers. Not even chocolate ones either. It was what it was. Every local band like us got the same treatment and amazingly we kept going back for more.

However...it was a great gig that Friday, so much so that we were invited to support The Brand New Heavies later in the year at the Boardwalk on the back of that performance. Strangely I was looking forward to the refreshments. Surely supporting a band of such high caliber the club would find it in their hearts to throw us a custard cream or...any biscuit would be nice. I couldn’t wait.

Unfortunately The Brand New Heavies cancelled their Manchester gigs that year and once again it wasn’t to be.
That’s how the cookie crumbles......

For more Knowing Irene and the 80s scene in Manchester www.facebook.com/...
Artefact added : 14th May 2021
by Tony Bennett

catmulle Says –
What a great story, thanks for sharing! I'm sorry you didn't get to Hobnob with The Brand New Heavies that year. 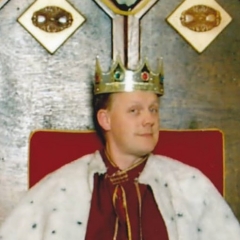