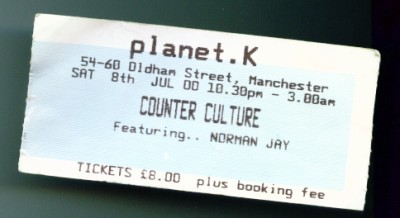 Planet K was a cool venue. It was spacious and airy and had a great lighting feature behind the bar made of different coloured squares. Quite Pulp-esque.

I think the booze was a bit cack - just warm cans of Red Stripe, or something like that.

During its relatively short life span I saw Norman Jay, Ashley Beedle, Lil Louis and Carl Craig. Some of these occasions were Robodisco nights. They had a great big wind-up air raid siren thing that was cranked up at the most exciting moments. I loved it and always wanted a go.

Planet K was a bit lacking in 'nooks and crannies' though. It sometimes had the feel of a large school gym. There was no where to go if you fancied a quick snog.

I've had to guess the year for this one, but I'm pretty sure Euro 2000 was on, and I'd made a makeshift skirt out of an England flag.

When Planet K closed down, it became Ascension, a kind of commercial student chart dance nightmare. No one went.
Artefact added : 13th November 2007
by Abigail

mr incognito Says –
Planet K was ace. Especially the Counter Culture nights which i think were the forerunner to 'Friends & Family'

edfan5150 Says –
I recall seeing Priory Of Brion (Robert Plant of Led Zeppelin) on 03/05/00. I was right down at the front about six foot from the man, I stood for hours to secure my place as he didn't turn up until 10:30 after watching his beloved Wolverhamton play Bolton. There were approx 500 people there, mind blowing when you consider the demand for Led Zep and Plant & Krauss tickets recently.

bornred Says –
I think I only saw one gig at Planet K, Man or Astroman - it was a great gig venue though, shame it didn't last

pure_shaw Says –
was there first night 1999, stereolab
also saw mogwai and arab strap
did a review of the mogwai gig for jeff graingers "subculture " fanzine , which was linked to "brightlighs" mogwai site.
agree with above comments, bar terrible considering you could go across the road and pay half price for a can
If you'd like to leave a comment, please Login. Login
Manchester Digital Music Archive is licensed under an
Attribution-NonCommercial-ShareAlike 4.0 International License.
Charity no. 1164179
Our archive currently contains 3616 Bands, 704 DJs, 1321 Venues, 219 Industry Professionals and 19598 artefacts contributed by 3537 members.