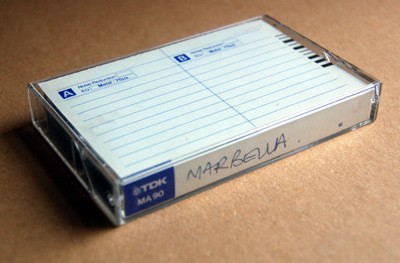 Here's the tape from a gig that was partially broadcast on Spanish radio. They played at the Marbella Estadio Municipal, Marbella on 10th July 1984 as part of a small Spanish tour.

Previously only the last 5 tracks were known of the setlist. This tape has the 4 that preceded those, though since the band tended to play 11-12 song sets around this time it's possible that there were more before Ceremony that remain unrecorded.

oldmonkey Says –
Basic set was 10 in those days, and there's no break (apart from the radio DJ) between Blue Monday and Sunrise on the version I've heard, so I am guessing there's only the one (first) song missing from this set. Perfect Kiss? Sunrise could be an encore, which would mean two tracks missing at the start.

kike Says –
Hello, I was in this concert. New Order plays for a short time because the openers groups (Pepe Habichuela and Cabaret Voltaire) started playing very late and the noise regulations the municipality of Marbella, had to stop the concert at 2:00 am, so New Order could only play about 50-60 minutes.

kike Says –
It's possible to buy a copy of this concert?
Thank you.

jsz Says –
It's part of the band's archive and they have no current plans to sell live recordings. Maybe one day though?
If you'd like to leave a comment, please Login. Login
Manchester Digital Music Archive is licensed under an
Attribution-NonCommercial-ShareAlike 4.0 International License.
Charity no. 1164179
Our archive currently contains 3714 Bands, 737 DJs, 1380 Venues, 252 Industry Professionals and 26791 artefacts contributed by 3782 members.