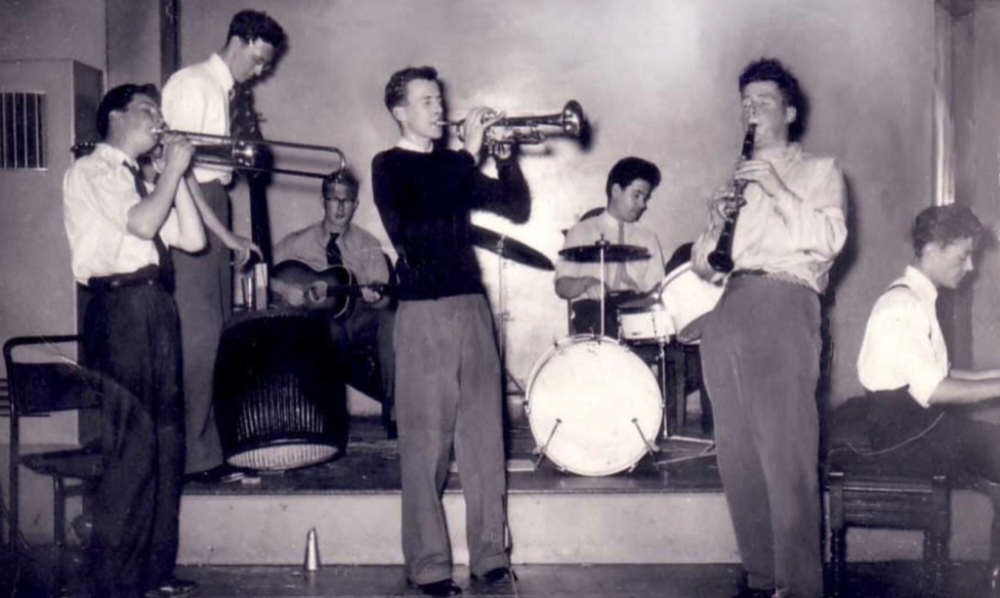 The seeds of the MUJB were sewn at David Morrison’s wedding. Using impromptu instruments, a group of ‘medics’ (David Morrison, Richard Ellis, and William Isbister) and an engineer from ‘Tech’ (Ray Taylor) played for the married couple. The session was so successful that we decided to form a band. Frank Hindley joined as piano player and we invited Chris Brown, a dental student, to join us on trombone. We searched far and wide for a trumpet player and after several attempts we found a young Manchester Grammar School student, Barry Dixon to play the trumpet. Richard Ellis was replaced by Chris Goudge, also from ‘Tech’, on clarinet but he was later replaced by Chris Berry. Arthur Themen, another Manchester Grammar School student deputised on clarinet at some concerts. When we played in University competitions we had to replace Barrie with another trumpet player, Dave Williams. We called ourselves the ‘Medics Jazz Band’ but clearly there were several non-medics in the band so we became known as the ‘Manchester University Jazz Band’. Following a Jack Teagarden concert in the Free Trade Hall, in Manchester, we managed to invite ‘Wild’ Bill Davidson to become our patron. We played in clubs and dance halls around Manchester, the Free Trade Hall itself and at University concerts and dances. We played a concert at the Manchester University Arts Festival in the Free Trade Hall and following this we were invited to play on Granada TV. We seemed to be playing between five and six nights every week and this was not considered to be too good for our studies! Despite this we did pass our final examinations in 1958 and the band broke up because house officer commitments would not allow us the time to play any more - a very sad time for many of us.