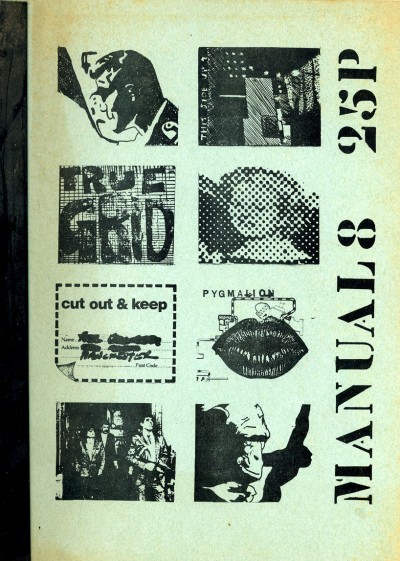 First of all this is NOT artwork for 'Lavolta Lakota'. It's the only option I could find to list this item. Being that 'Manual' was created by a cross section of artists and musicians.

'Manual' was the result of some public meetings held in Manchester in 1979/80. One of the recurring themes of the meetings was the lack of exhibition space for art in Manchester.

As a result it was decided that a 'magazine' produced quickly and cheaply in a 'readily accessible format' was the answer.

Manual was an A4 size publication, held together by a plastic slide binder. So the artwork inside could be displayed if required, without damaging any of the work without stapling the pages together.

It was a cross section of artists and musicians who contributed work.

Between 1st November 1982 and 12th February 1983, the original artwork from 'Manual' was displayed in a travelling exhibition in public libraries in the Manchester area. Levenshulme, Longsite, Newton Heath and Miles Platting.

On a personal note this is were things start to become interesting. I use to buy 'manual' from my art teacher at school, I had nothing to do with it, but had friends who contributed. The main protagonist for 'Manual' was a Tom Eastwood who lived at 325 John Nash Crescent, Hulme. I moved into Hulme in 1984 only a few doors down from 325. At the time a band called Lavolta Lakota lived there and to prove the point they sprayed it in large letters outside their flat.

I wondered if the Tom Eastwood of 'Manual' had anything to do with Lavolta Lakota?

Bizarrely, when I went with a friend to the local council to get another flat in 1985..we were offered 325 John Nash Crescent! So we moved in.
Artefact added : 24th December 2007
by mick_pye

mat Says –
interesting... is this mainly a hulme publication? were most of the artists from the crescents?

mick_pye Says –
No it was more a North West publication, but based in Manchester. I know they had the meetings for 'Manual' in Hulme.

shivadescending Says –
There was a Michael Eastwood in the band:
www.discogs.com/a...

mick_pye Says –
I'd forgot about this..Oh right cheers so could of been his brother or something.
If you'd like to leave a comment, please Login. Login
Manchester Digital Music Archive is licensed under an
Attribution-NonCommercial-ShareAlike 4.0 International License.
Charity no. 1164179
Our archive currently contains 3714 Bands, 737 DJs, 1379 Venues, 252 Industry Professionals and 26569 artefacts contributed by 3776 members.